In developed countries, medical devices are frequently rendered obsolete by advances in technology. Much of this older equipment has remaining usable life and, once refurbished, can be put to good use in other parts of the world to improve the care of those stricken by digestive diseases.

The goals of the Outreach Program are to ensure that all WGO Training Centers are properly equipped for primary and/or advanced gastroenterology (GI) training and to equip the home institutions of WGO trainees in developing nations so that they may return to their local setting and use the skills they have acquired through their training.

To make a donation to support the Outreach Program, please visit http://www.worldgastroenterology.org/wgo-foundation/support-wgo/make-a-donation. 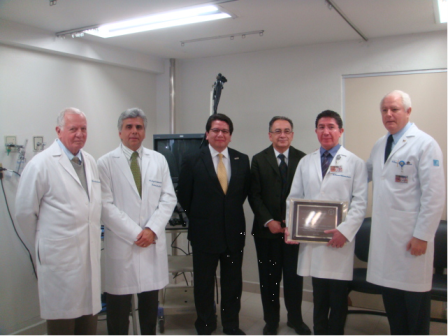 The Mexico City Training Center is located at the Instituto Nacional de Ciencias Médicas y Nutricíon. Fundamental to the Center are the medical and paramedical personnel and infrastructure of the departments of Gastroenterology, Gastrointestinal Endoscopy, Imageology and the Medical Skills Development Center (Centro de Desarrollo de Destrezas Médicas, CEDDEM).

Dr. Fernando Gabilondo, Director of the INNSZ; Dr. Misael Uribe, Head of the GI Department; and Dr. Miguel A. Valdovinos, Director of the WGO Training Center, thanked WGO and Lic. Alejandro de la Cruz, Manager of Olymex for this important donation, which will contribute to teach trainees from Mexico, Central, and South America.

The La Plata Training Center is located in the Gral. San Martín Hospital, a referral hospital situated in the Province of Buenos Aires (population 15 million). The hospital has 500 beds and all clinical and surgical specialties. The Gastroenterology Services include the Department of Endoscopy, Department of Hepatology, Department of Motility, and an Endoscopic Emergency Ward. Over 500 endoscopic procedures are performed monthly, 60% of which are therapeutic.

The inauguration was held with the directors of the La Plata Training Center at the hospital along with the presence of Dr. Claudio Ortiz, one of the highest authorities of the Ministry of Health of the Province of Buenos Aires. The equipment, donated in 2011 by Olympus, was assigned to CETUS (Therapeutic Endoscopy Center and Department of Gastroenterology), and is the only one of this kind in all of Argentina.

Additional information can be found by visiting the Training Center’s website at www.laplatatrainingcenter.com. 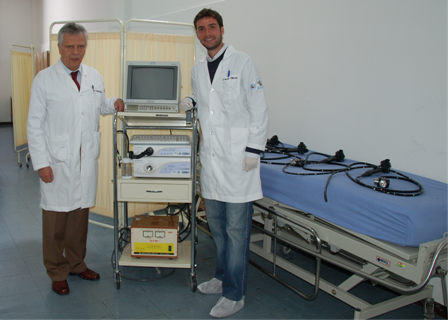 The La Paz Training Center is located in the Bolivian-Japanese Institute of Gastroenterology, which is situated in a University General Hospital.

The center received endoscopy equipment donated by Olympus in early 2011. The endoscopic equipment is being utilized through the training programs developed by the WGO La Training Center.

In 2009, the Suva Training Center at the Fiji School of Medicine (FSM) was selected as the receiving institution of a generous endoscopic donation by Fujinon, A Fuji-Film Company.

The arrival and installation of the donated equipment at the beginning of August 2009 allowed for immediate usage and training during the Center’s annual training course. Thanks to Fujinon’s generosity, the Center has organized a new endoscopy unit, which was inaugurated during the August course. Members of the Gastroenterological Nurses College of Australia, assisting the Australian gastroenterologists in Fiji, supported the installation of the equipment.

FSM is one of only three institutions in Fiji and the Pacific Island nations to offer local medical training in the region. With such limited training available and a regional population totaling approximately 1.7 million people, the ratio of doctors per 1,000 population is at a mere 0.1 - 0.4. The shortage of doctors in nearby countries, such as Australia and New Zealand, has contributed to this “brain drain”, as local doctors seek employment abroad. From 1987 to 2002, 510 doctors left the government health service in Fiji, while during the same period, only 284 graduated from the Fiji School of Medicine.

Until recently, specialist training in the South Pacific was unavailable and has often been undertaken abroad, making it difficult for doctors who have become accustomed to life in their new environment to return home again once their training has been completed. Thus, the lack of local specialist training has been conducive to the “brain drain” being witnessed in the region. However, local postgraduate programs have been shown to help combat this trend in that doctors-in-training work for most of the time in their home country while learning to diagnose and treat disease with the resources available, thereby making them less likely to leave their home country once specialist qualification has been achieved.

The donation of equipment by Fujinon, A Fuji-Film Company, has proven beneficial and successful in the delivery of quality patient health care as well as in the improvement of training conditions for gastroenterologists within the region. 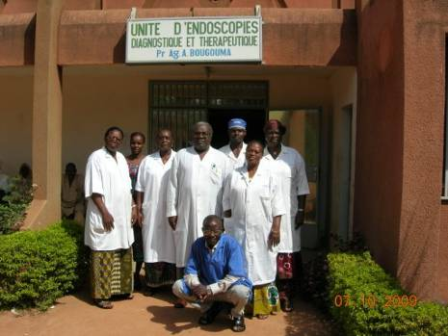 Located in the capital city of the West African nation of Burkina Faso, the hospital has 850 beds and serves the city’s nearly 1.5 million residents. The main digestive diseases facing the population are liver, stomach, and esophageal cancer.

The donation of the equipment motivated hospital administrators to open a unit for diagnostic and surgical endoscopy. As a result, doctors are able to use modern technology to conduct life-saving tests and perform emergency operations rather than attempting to do so with the previously outdated equipment. This equipment also allows the application of current methods of treatment whereas formerly, patients had to be evacuated abroad, to either the Ivory Coast or France, which was very expensive and many patients in this poor nation could not afford it. The facility serves as a reference for private clinics in town as well as in neighboring countries.

The hospital has also significantly increased the number and types of treatments, both endoscopic and in other areas of specialty, than previously possible. Procedures such as polypectomy, ligation of esophageal varices, mucosectomies, dilatations, and insertion of endoprotheses are now performed. In the three years following the initial donation of equipment in 2005, over 3,600 procedures had been performed, including:

When Professor Alain Bougouma received the news that Yalgado University Medical Center would become WGO Outreach Center, he had this to say: "You would not imagine how overjoyed the Director of our hospital, the Minister of Health and I were at reading your message informing us that the Yalgado University Medical Center has been selected as the site for donation of equipment and supplies. That was our New Year's present. I am most grateful for your allowing us, through your Program, to acquire equipment we would never have been able to receive! Our population will benefit from this immensely." 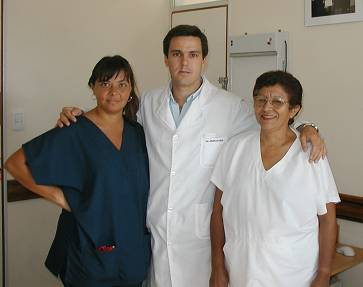 The Eva Perón Teaching Hospital is a 120-bed public facility that services a large and economically disadvantaged population. The hospital has a history of excellence in digestive surgery, but due to a struggling economy and a disastrous flood of the nearby Paraná River in 2001, the facility deteriorated and basic endoscopic services were discontinued. In 2002, Dr. Diego Murature, a former trainee of the WGO Santiago Training Center, applied for the Eva Perón Hospital to become a WGO Outreach Center, and in 2003, his application was successfully chosen by an international review committee.

Through the Outreach Program and with governmental and local parties, a wing of the hospital was remodeled for the new endoscopy unit. This new area includes an intake and processing area, the endoscopy room, a recovery area, and a combined endoscope-processing space and nurses' area. All construction work was done on a volunteer basis by local inhabitants.

In September 2003, the center was officially opened. In the three months following the opening of the Endoscopy Unit, 129 upper endoscopies, 60 colonoscopies and sigmoidoscopies, and 21 ERCPs were performed for a wide variety of diagnostic and therapeutic indications.

After receiving the equipment, Dr. Murature said, “Not only do we now have the ability to resolve endoscopy problems in our own hospital, but we also receive patients from other hospitals.”