Funding and conflict of interest statement
All of the authors have stated that there were no conflicts of interest in relation to their authorship of this paper. Anton Le Mair acts as guideline development consultant for WGO. 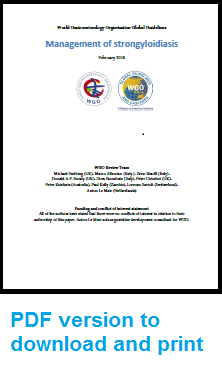 1.2  WGO cascades for the diagnosis and management of strongyloidiasis

WGO cascades: a hierarchical set of diagnostic, therapeutic, and management options for dealing with risk and disease, ranked by the resources available.

World Gastroenterology Organisation (WGO) guidelines and cascades are intended to highlight appropriate, context-sensitive, and resource-sensitive management options for all geographical areas, regardless of whether they are “developing,” “semi-developed,” or “developed.” WGO cascades are context-sensitive, and the context is not necessarily defined solely by resource availability.

Cascade options both for diagnosis and management of strongyloidiasis are key, and represent the most important part of this document. Particular emphasis is given to gold standard, medium-resource, and low-resource categories. In addition, we also suggest one or more algorithms that should guide the clinician through the pathway of the patient’s clinical history, clinical signs and symptoms, diagnostic tests, and treatment options.

1.2.2  WGO cascades for the diagnosis of strongyloidiasis

1.2.3  Cascade for the management of strongyloidiasis

For the strongyloidiasis treatment cascade, there is only really one option, which is single-dose ivermectin, irrespective of the local resource level. In case of treatment failure and in view of the lack of evidence for alternative treatments, we recommend repeating the ivermectin course over 2 days.

Strongyloidiasis is an infection with Strongyloides stercoralis (Fig. 1), a roundworm that occurs widely in tropical and subtropical areas, but also in countries with temperate climates (Table 3).

Strongyloidiasis is different from all other soil-transmitted helminthic infections because the eggs produced through parthenogenesis by the parasitic female worm hatch when still in the bowel and produce rhabditiform larvae. 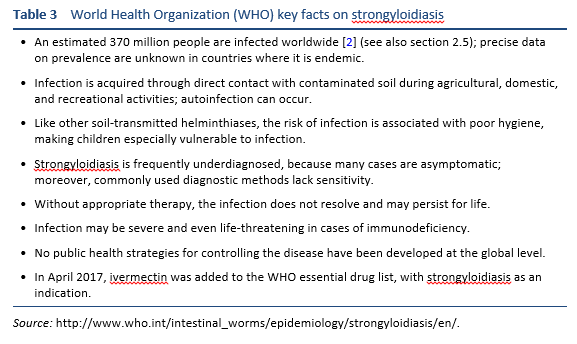 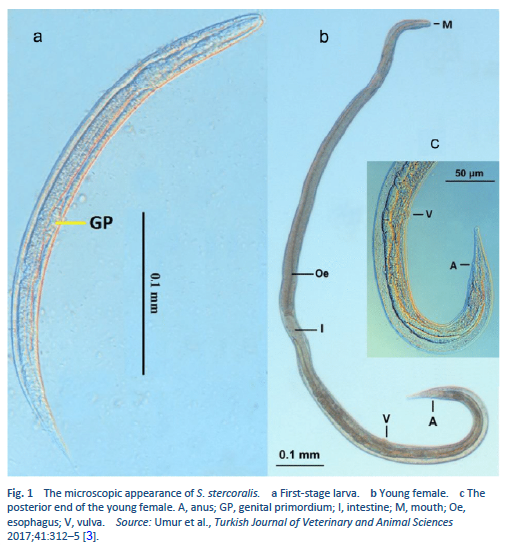 There are two important stages in the life cycle of the worm, the rhabditiform stage and the filariform stage (Figs. 2, 3). 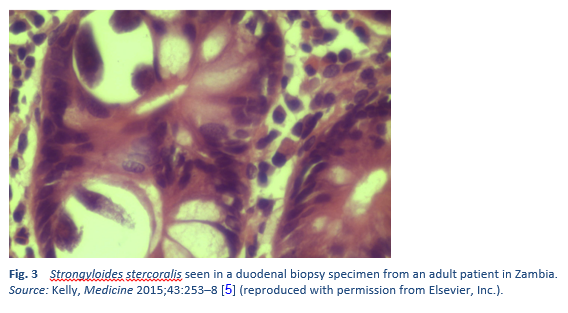 Although strongyloidiasis has a similar route of infection to the other soil-transmitted helminthiases, it needs additional diagnostic tools beyond microscopy and requires different treatment. In areas in which preventive anthelmintic chemotherapy with ivermectin has been used to control onchocerciasis or lymphatic filariasis, there has been a noticeable reduction in the prevalence of strongyloidiasis [6–10]. The WHO Essential Medicines Committee has included ivermectin in its list, including in combination with albendazole, for strongyloidiasis. Some 900 million people are now receiving this combination as part of neglected tropical disease (NTD) campaigns [11]. 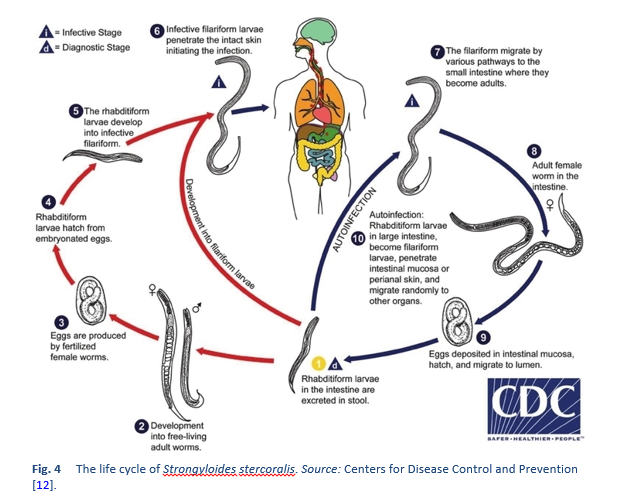 The life cycle of Strongyloides is more complex than that of most nematodes, with its alternation between free-living and parasitic cycles and its potential for autoinfection and multiplication within the host. There are two types of cycle:

Strongyloidiasis is endemic in tropical and subtropical regions (Figs. 5–8), and the prevalence is probably much higher than the 100 million people previously quoted: higher estimates of up to 370 million people have been published [2]. It is also widespread in eastern Europe, and scattered foci of the infection have been reported in elderly people in the Mediterranean region.

We know little about the prevalence of infection and less about the clinical burden of morbidity. If it is indeed widespread, the risk of iatrogenic hyperinfection (with immunosuppressive management) is a challenge. It is thought that strongyloidiasis infects up to 40% of the population in some areas of the tropics and subtropics [14]. 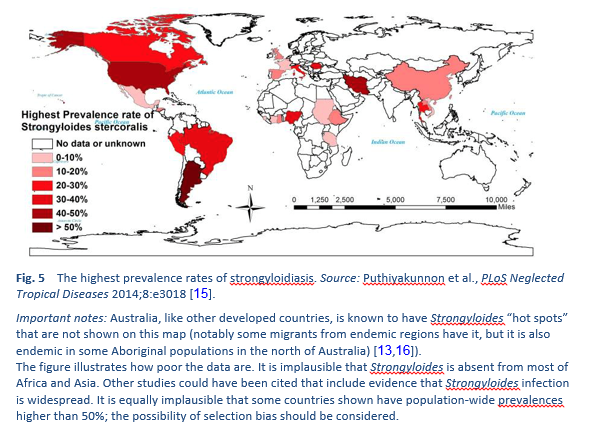 Migrant infections may occur in any country and may represent a potential global hazard. The disease can present in a consulting room anywhere. 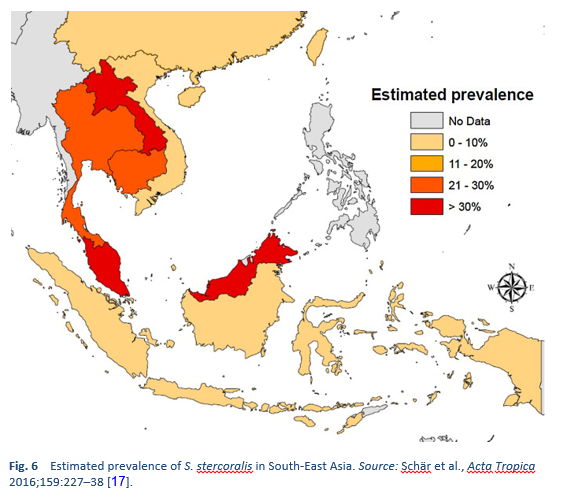 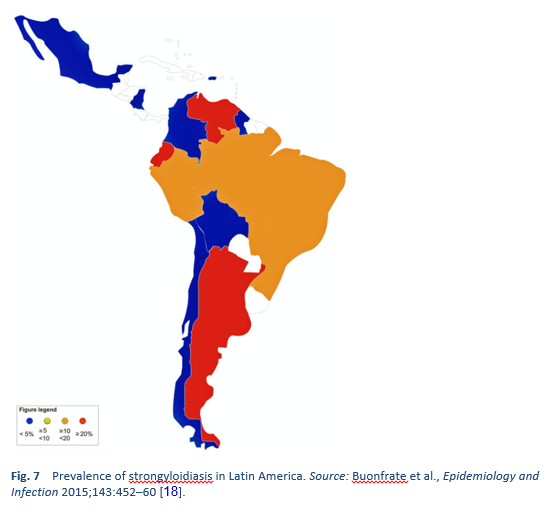 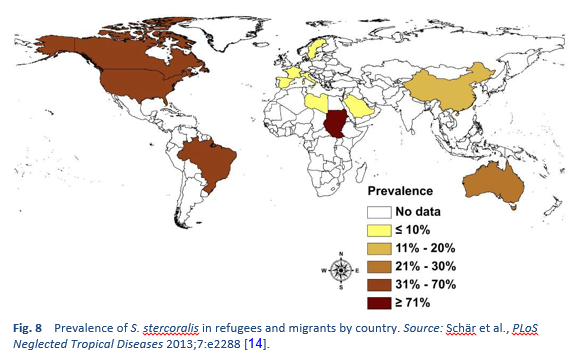 2.4  Risk factors and special groups at risk of infection

The biggest risk factor overall is socio-economic disadvantage in a relevant environment in which Strongyloides is endemic.

2.5  Risk factors and special groups at risk for disseminated infection

Strongyloidiasis ranges from asymptomatic to severe forms and can lead to hyperinfection syndrome and disseminated disease, associated with a high mortality rate in immunosuppressed patients.

In the tropics, there are many patients with rheumatoid arthritis, bronchial asthma, and glomerulonephritis who receive long-term steroid treatment. Patients can purchase steroids directly from pharmacies.

Strongyloidiasis is not an important AIDS-associated opportunistic infection, but it is an opportunistic infection associated with human T-lymphotropic virus type I (HTLV-I) [19]. Although patients with human immunodeficiency virus/acquired immune deficiency syndrome (HIV/AIDS) can have disseminated strongyloidiasis or hyperinfection syndrome, observational studies have not shown an increased risk in this population [20].

Chronic infections are a potentially important cause of undisclosed morbidity. There is also a lack of efficient diagnostic tools, which are often cumbersome and have low sensitivity, so that the true prevalence of infection and morbidity is not known. Since strongyloidiasis is viewed as an unusual disease, there has been little investment in diagnostic or epidemiological surveys, especially in children.

The key to diagnosing strongyloidiasis (Table 5) is to have an index of suspicion—the diagnosis can only be made for certain when the worm is identified in stool. If there is a low worm burden, and due to the intermittent release of larvae in stool, it is often impossible to detect the worm if only a single stool is examined. Serial analysis of specimens taken over 3 days is necessary. A white blood cell count (WBC) is important, as is eosinophilia (high in 50% of patients).

A patient’s eosinophilia status can be confusing: it is a most helpful sign in simple, uncomplicated infections and is mostly absent in disseminated strongyloidiasis. 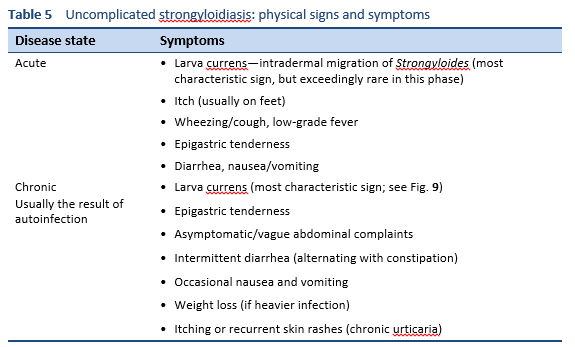 Table 6 lists signs and symptoms that can be seen with hyperinfection syndrome and disseminated strongyloidiasis [20]. 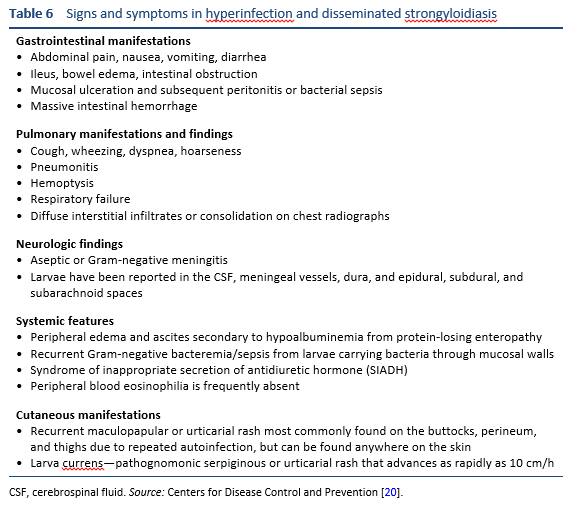 Evidence highlights the need to survey patients with eosinophilia even when a history of residence or travel in an endemic area is absent [22].

Several diagnostic procedures have been developed over the years, and their use depends on local availability and relevant expertise: string tests, duodenal aspirates, duodenal biopsy, bronchoalveolar lavage (BAL), immunodiagnostic tests, and repeated examination of fresh stool with different methods.

The global prevalence of Strongyloides stercoralis infection has long been underestimated. This is likely due to reliance on direct stool microscopy and the Kato–Katz technique, which are commonly used in prevalence studies but are inadequate for S. stercoralis detection [23]. The commonly used fecal-based methods have particularly low sensitivity. Microscopy can be improved by examination of several stool samples, as well as concentration techniques [24], but the sensitivity remains low.

In both low/middle-income and also developed countries, the number of personnel who are well trained in the microscopic identification of parasites appears to be decreasing.

Lodh et al. [25] presented research results showing that S. stercoralis DNA can be detected in urine. Once available, and if they are sufficiently sensitive, urine sample tests may be attractive, as they are much less labor-intensive and resource-intensive and do not involve the health risk of examining fresh stool [25].

Finding the larvae in stool, duodenal fluid, or occasionally in other tissues or fluids by means of microscopy establishes a definitive diagnosis of strongyloidiasis (Tables 7, 8; Figs. 10, 11). However, because of low larval densities, a single examination is insensitive [26].

Several methods are used to identify larvae in stool by microscopy:

The use of these methods depends on local resource availability and especially the expertise of the microscopist.

Stool analyses for Strongyloides using the Baermann funnel technique and Koga agar culture method are the best fecal diagnostic methods for field settings today. These methods detect the parasite with greater sensitivity than other fecal methods. 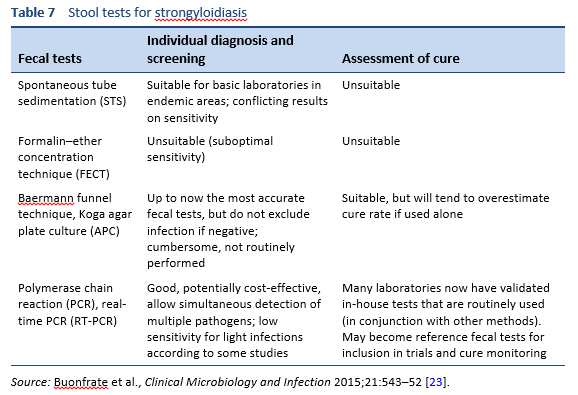 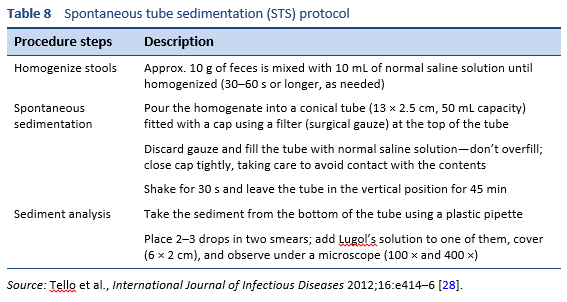 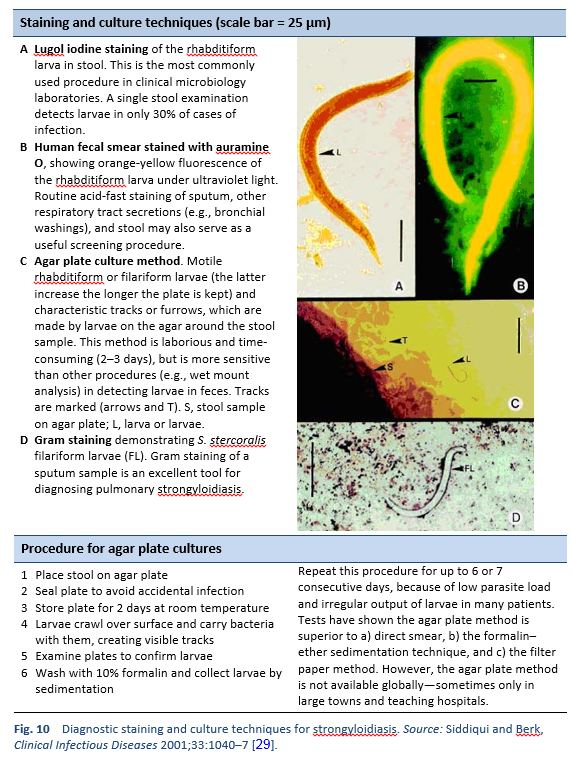 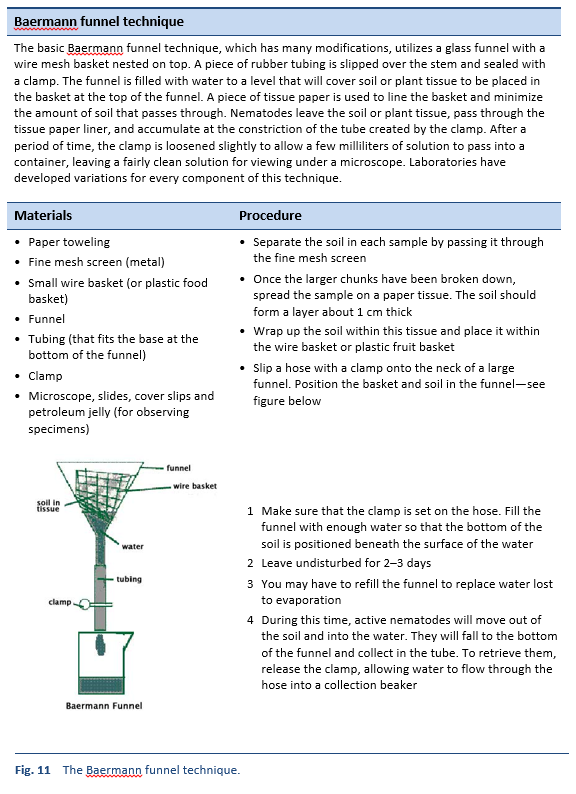 In comparison with the Baermann technique and agar plate culture, serological tests have greater sensitivity, although some authors have concerns about their specificity [20].

The most convenient and widely used serological method is the enzyme-linked immunosorbent assay (ELISA) to detect serum immunoglobulin G (IgG) against a crude extract of filariform larvae. ELISA is labor-intensive and requires a certain level of laboratory infrastructure for performance and interpretation of results, and this has hampered its applicability especially in areas where Strongyloides is endemic [26]. Moreover, serology has limited value for follow-up after cure in endemic areas, as reinfection is possible.

There are many conditions that produce similar symptoms, including causes of acute and chronic diarrhea and malabsorption, other causes of eosinophilia, and other causes of severe Gram-negative septicemia. The following should be considered in the differential diagnosis:

The key diagnostic element is to think of strongyloidiasis as a possible diagnosis and identify the parasite directly and/or through serologic/molecular tests.

The treatment of strongyloidiasis (Table 9) is difficult because in contrast to other helminth infections, the Strongyloides worm burden has to be eradicated completely. 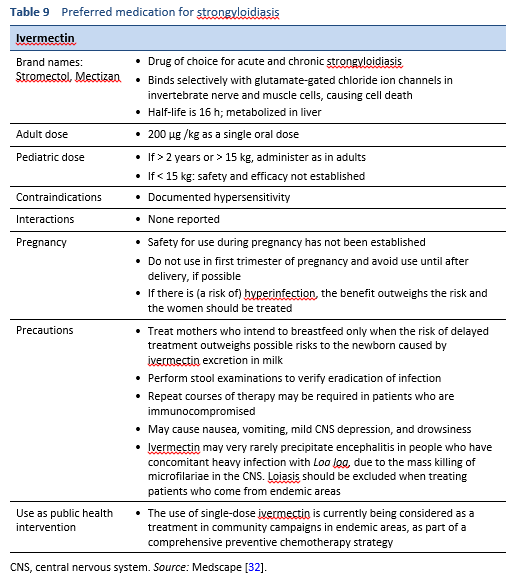 Although some authors state that these terms describe two different aspects of the infection (hyperinfection: high levels of larvae in the usual body parts; dissemination: larvae present in any body part, not usually included in the parasitic cycle), they can probably be used interchangeably. In fact, they both refer to a very high parasite load and rapid spread of the infection—usually in immunosuppressed patients and often associated with corticosteroid treatment. Hyperinfection carries a high risk of Gram-negative septicemia, so broad-spectrum antibiotics are usually given, especially to prevent bacterial meningitis.

In critically ill people with hyperinfection or disseminated strongyloidiasis who are unable to take oral medicines, ivermectin has been administered successfully by the subcutaneous route [36]. For critically ill people, ivermectin is given daily for a duration of at least 14 days, with the total duration of treatment depending on when microscopic examination of body fluids positive for larvae become negative (this can be stool or urine, or others in cases of hyperinfection) [37].

Infection is prevented by avoiding direct skin contact with soil containing infective larvae. People at risk, especially children, should wear footwear when walking on areas with infected soil. Patients at risk should be identified and appropriate diagnostic tests should be performed before they begin immunosuppressive therapy.

Persons in household contact with patients are not at risk for infection. The proper disposal of human excreta reduces the prevalence of strongyloidiasis substantially.

No accepted prophylactic regimen exists and no vaccine is available.

Standard precautions should be observed for patients hospitalized with strongyloidiasis. Wearing gloves and gowns and diligent handwashing hygiene is important for those coming into potential contact with the patient’s feces [20].

The study by Forrer et al. [46] showed that community-based single-dose ivermectin treatment for S. stercoralis plus sanitation effectively reduced the infection risk in rural communities in Cambodia, with over 85% of villagers remaining negative 1 year after treatment. Infection control is feasible and highly beneficial, particularly in combination with improved sanitation [46].

Khieu et al. [47] found that individuals with a latrine at home were infected with S. stercoralis significantly less frequently than those without one. The calculated population attributable risk would be reduced by 39% if all participants used a latrine for defecation [17,47].

Croker and She noted that the high prevalence of eosinophilia among persons with latent Strongyloides infection in Los Angeles County highlights the importance of screening individuals with eosinophilia in whom more common causes have been ruled out [48].

The StrongNet [38], an international network for improving diagnosis and access to treatment for strongyloidiasis control, advocates better and field-friendly diagnosis as well as the availability of ivermectin on a large scale for the control of strongyloidiasis in endemic areas. Following the efforts of this network, ivermectin has recently been included to the WHO’s Essential Medicines List for the treatment of strongyloidiasis; the ultimate goal is to develop a public health control strategy and to include S. stercoralis in the WHO’s preventive chemotherapy strategy for soil-transmitted helminthiasis .

Acute and chronic strongyloidiasis have a good prognosis. However, untreated infection can persist for the remainder of the patient’s life, due to the autoinfection cycle. A patient’s prolonged absence from an endemic area is no guarantee of freedom from infection. Severe disseminated infection is commonly a fatal event, and it is often unresponsive to therapy.

In chronic strongyloidiasis, immunosuppression poses a risk for accelerated autoinfection. This may result in a sepsis-like syndrome, S. stercoralis hyperinfection, and the dissemination of larvae to distant organs such as the central nervous system, causing S. stercoralis–associated meningitis [49]. 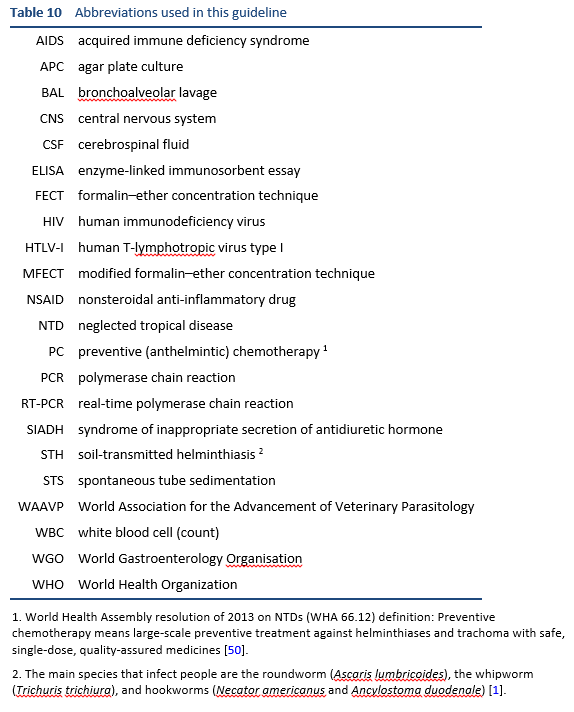