Hepatitis E virus (HEV) is associated with acute viral hepatitis E, an enterically transmitted hepatitis. HEV is becoming increasingly  recognized in many parts of the world especially in developing countries like south Asia and Africa 1, 2. It is a significant worldwide public health problem with estimated infected cases of HEV amounting to about one third of the world population 3.

The first outbreak of HEV occurred in New Delhi (India) in 1955-56; this was retrospectively confirmed and reported that approximately 29,000 cases had jaundice 4. Subsequently, many epidemics have been reported from other parts of the world such as parts of Asia, Mexico and Africa 2. Moreover, a sporadic form of acute HEV infection occurred in developing parts of Asia and Africa as well as in developed nations 5.

There are at least four genotypes (1-4) found globally as shown in Table 1 and Figure 1 8, 9. There are clear differences in the epidemic potential of various genotypes, and epidemics occur exclusively in underdeveloped regions where the predominant circulating human strain is HEV genotype 1 (Table 2) 2. Incubation period for HEV infection among human volunteers following oral ingestion has been 4-5 weeks;  however, in actual epidemics where time of water contamination is known, incubation period varies from 2-10 weeks 9. There are at least four routes of transmission; fecal-oral transmission (most common), foodborne transmission, transfusion of infected blood products, and  vertical transmission. The commonest is fecaloral transmission 9, 10. 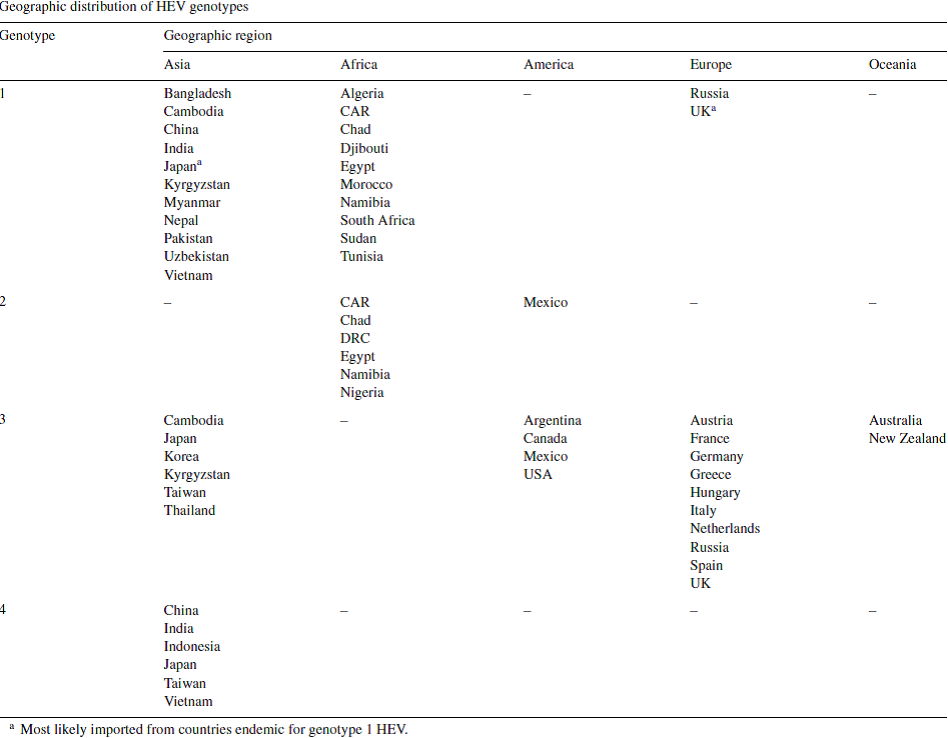 The epidemiologic features of epidemic hepatitis E have remained unchanged since the first described outbreak from India; highest case rates among young individuals and a high fatality rate among pregnant women; the latter is characteristic of acute HEV infection 2. Different  epidemiologic patterns (sporadic and epidemic) have been noted in countries where disease is either non-endemic or highly endemic; hence, these differ according to routes of transmission, affected population groups and disease characteristics (Table 3) 7, 10.

This infection is endemic to tropical and subtropical countries in Asia, Africa and Central America. Outbreaks have been reported from Indian subcontinent including Pakistan mainly from northern areas 7, 11-13. These waves of HEV infections are related to contamination of drinking water with human wastes. Such epidemics had varied from unimodal epidemic lasting a few weeks to multipeaked epidemics which remained for many months with thousands of cases 11, 14. Rain leading either to floods or stagnation of water has been noticed as a main factor for drinking water contamination 14. In these areas, young adults are more affected than children who are mostly asymptomatic and male population is affected more than females. It had also been noted that there is predilection for pregnant women for HEV infection and causing higher mortality in this subset of patients. During pregnancy, HEV infection occurred usually in second or third trimester of pregnancy 7.

It has also been observed over the years that the sporadic form of hepatitis E infection occurs in high endemic areas with same characteristics of age, gender and severity and none of chronic sequelae 7.

From Pakistan two separate HEV isolates (87-Pakistan-A and B) were detected a few years ago 15. Recently an investigative report on an outbreak from southern part of Pakistan was presented, that showed new Pakistani strains 16. Our group has also reported HEV infection  leading to acute liver failure in pregnancy in mid-1990’s 17.

These regions include primarily the developed world (including North America and Europe) and some countries of Asia Pacific regions (e.g., Japan, Taiwan, Hong Kong, Australia), where the incidence of HEV infection is quite infrequent. Until very recently it was considered that HEV infection is primarily imported to these places by travelers from high endemic areas to low endemic regions. But in recent past it has been shown that epidemics in low endemic areas like North America as well as in Europe are actually autochthonous as well 9, 18-20. Few  observations have suggested that in these regions HEV infection is caused by zoonotic spread of infection from wild or home animals; in these observations, HEV isolate belong to genotype 3 or 4. These human isolates have been experimentally transmitted to non-human primates 7, 18. A report from Japan has also confirmed that few of the cases had consumed uncooked deer meat and isolates of HEV infection from these cases had similar genomic sequencing to those from wild hog and wild deer 21, 22. Recently from Korea a case series reported that only two patients had a history of travel to India while the remaining cases were supposedly autochthonous with isolation of genotype 4 1.

Few patients suffer a prolonged cholestatic phase marked by troublesome itching, though usually with good clinical outcome 7. Clinical outcome of HEV infection in patients with preexisting liver disease or any other comorbid is poor 23. Case fatality rate ranges from 0.5%-4% in hospitalized patients while community based surveys have shown a lower mortality rate 9.

It has also been observed that HEV infection in low endemic areas, usually affects somewhat older people mostly, males with a higher frequency of other comorbid conditions including liver disease and in these areas the outcome of HEV infection in pregnancies is better than  that in high endemic areas 24.

Chronic HEV has been reported in the immunosuppressed (e.g. renal transplant, liver transplant) patients and may lead to cirrhosis 7, 25, 26.

There is no specific treatment for HEV infection because it is self-resolving infection and only patients with acute liver failure require specific management especially intensive care unit that may require liver transplantation 7, 28.

The main mode of prevention would be to break the principal route of transmission (oral-fecal) by providing safe drinking water, proper treatment and safe disposal of human excreta and provision of health education (avoidance of uncooked food/meat, implementation of sanitary food handling practices) to endemic regions 7, 9. Vaccine is currently undergoing extensive trails for prevention and is showing promise 2.

Initially it was thought that HEV infection is a disease of only underdeveloped countries but now it has been proven that this is also present in the developed world as well. As a consequence this has changed our understanding of its presence. Hence worldwide presence is a major concern because of its association with sporadic infections as well as epidemics. HEV infection has intricate epidemiology with water borne human to human contact and zoonotic transmission.