Nonalcoholic fatty liver disease (NAFLD) is believed to be the most common form of chronic liver disease in Western countries. The clinicopathologic spectrum of NAFLD ranges from simple steatosis to nonalcoholic steatohepatitis (NASH). NAFLD is commonly associated with the components of the metabolic syndrome, including obesity. The prevalence of adult obesity and the metabolic syndrome, estimated at
34% in the United States, has reached epidemic proportions. NAFLD affects approximately 30% of general Western population and has obesity
as an independent risk factor. There is however evidence that the epidemic of obesity may be stabilizing, so it is possible that also NAFLD/NASH and its complications may halt its progressive incidence in the near future.

This article reviews the epidemiology of obesity and NAFLD, including non-alcoholic steatohepatitis (NASH).

Nonalcoholic fatty liver disease (NAFLD) is one of the most common chronic liver disease in western countries and it is the leading cause
of abnormal functional liver tests in the primary care setting 1. The clinic-pathologic spectrum of NAFLD ranges from simple steatosis to nonalcoholic steatohepatitis (NASH). Whereas simple steatosis seems to have a relatively benign clinical course, patients with NASH can develop fibrosis, cirrhosis, and hepatocellular carcinoma (HCC) 2.

NAFLD is closely associated with the components of metabolic syndrome (MS), including obesity and Type 2 diabetes. Approximately 90% of NAFLD patients have more than one component of the MS and one-third has the MS. In addition, the risk of having NAFLD increases exponentially with the addition of each of the MS components 3. The alarming epidemic of obesity has fueled an increasing prevalence of NAFLD, making NASH potentially the most common cause of advanced liver disease in coming decades 4. At present, the real prevalence of NAFLD is still underestimated.

Obesity is becoming one of the most serious public health problems worldwide and its prevalence has dramatically increased in the last few decades, reaching epidemic levels. According to the National Health and Nutrition Examination Survey (NHANES) data, prevalence of obesity in the U.S. was relatively low and stable between 1960 and 1980, but more than doubled among adults (from 15% to 32.9%) and tripled among children (from 5.5% to 17.1%) between 1980 and 2004. In 2003–2004, 66.2% of U.S. adults were either overweight or obese 5. Furthermore, one in every 20 Americans had either morbid obesity (defined as a body mass index [BMI] > 35 kg/m2 together with obesity-associated diseases or a BMI > 40 with or without obesity-associated diseases) 6. In Europe, the prevalence of obesity is increasing too, and predictably will continue to increase 7. However, in 2009-2010, the prevalence of obesity in the U.S. was 35.5% among adult men and 35.8% among adult women, with no significant change compared with 2003-2008, thus suggesting that the epidemic may be slowing or leveling off 8. Also, recent studies suggest a leveling off of the epidemic in children and adolescents from Australia, Europe, Japan and the USA, with
heterogeneity according to socioeconomic status 9.

Nonetheless, the World Health Organization (WHO) projects that by 2015, approximately 2.3 billion adults will be overweight and more than 700 million will be obese.

The prevalence of NAFLD has not been well established. It varies with the study population and the modality used to establish the diagnosis (eg, liver enzymes, imaging, liver biopsy). In the USA, a study performed in an ambulatory clinic cohort, found the prevalence of ultrasonographic NAFLD to be 46%, with a high prevalence of diabetes and obesity (45%); when performing liver biopsy in ultrasound positive patients, it was found that 30% of patients with NAFLD (12% of the total cohort) had NASH 10. Also, Younossi et al, when comparing three cycles of NHANES, from 1988 to 2008, found that NAFLD had been continuously increasing and was now the more frequent chronic liver disease in the USA, accounting for 75.1% of chronic liver diseases (CLD) in the 2005-2008 period. Importantly, obesity was an independent predictor of NAFLD in all periods 11.

Non-invasive radiological modalities applicable to large scale screening studies of NAFLD include ultrasonography, magnetic resonance
imaging (MRI) and magnetic resonance spectroscopy (MRS). The DIONYSOS nutrition and liver study based on ultrasonography demonstrated that the prevalence of NAFLD in two communities of Northern of Italy, with and without suspected liver disease was 25% and 20%, respectively 12. Another study based on ultrasonography, in a cohort of 35,519 Japanese individuals presenting for a health check-up over 10 to 12 years, identified an increased prevalence of NAFLD from 13% to 30% 13; in this study there were no clear exclusions of other liver diseases. Also, Caballeria et al. found in a Spanish cohort of 766 individuals, a prevalence of NAFLD of 25.8%, 33.4% men and 20.3% women 14. A study from Dallas, Texas in 2004, using proton nuclear MRS, identified NAFLD in 31% of a multi-ethnic, population-based
sample 15. Hispanics had the highest prevalence of hepatic steatosis (45%), followed by Caucasians (33%) and African Americans (24%). Lastly, a study from Hong Kong, using proton nuclear MRS and transient elastography (TE), in 922 subjects from the general Chinese population, showed NAFLD in 27.3% of subjects and advanced fibrosis in 4% of NAFLD patients 16.

In a series from obese, undergoing bariatric surgery, prevalence of NAFLD ranges from 74-98%, while that of NASH can be as high as 37% 17-19. The proportion of advanced fibrosis in NAFLD patients ranges from 2-9%. In morbidly obese patients, elevated AST, male gender and type 2 diabetes were found to be predictive of NASH 18. In living liver donors, supposedly healthy, the prevalence of NAFLD ranges from
3% to 51% 20-22 and that of NASH from 1% to 15% 20, 23. In a Korean study in which liver biopsies were performed on 589 consecutive
potential liver transplant donors, reported NAFLD prevalence was 51% 21. In the United States, liver biopsies performed on potential liver
donors revealed that 20% of donors were ineligible for organ donation based on the degree of the steatosis (>30%).

Given the parallel increase in prevalence of obesity and NAFLD, it is intuitive to correlate the two epidemics. Also, the fact that obesity is
usually an independent risk factor for NAFLD supports this assumption. Furthermore, as shown in Figure 1, in each area of the world, there is a very strong correlation between the prevalence of NAFLD and obesity 28. 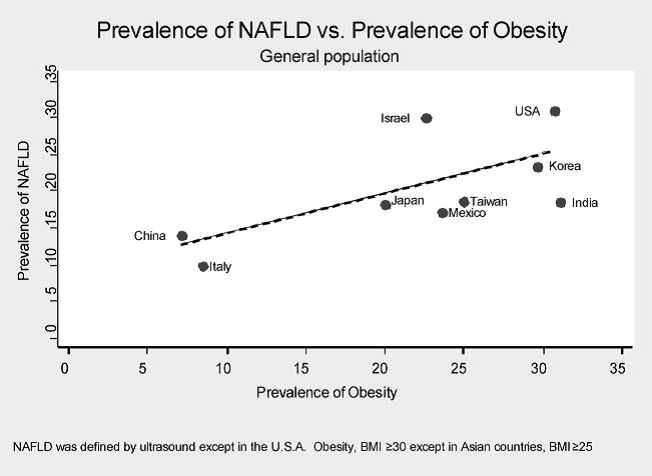 Figure 1: Correlation between prevalence of obesity and prevalence of NAFLD around the world Lazo M and Clark JM. “The Epidemiology of Nonalcoholic Fatty Liver Disease: A Global Perspective.” Seminars in Liver Disease. 2008; 28(4). www.thieme.com (reprinted with permission).

The recent evidence that obesity epidemics seems to be lowering or at least leveling off is good news. It is possible that the increasing self-consciousness of the risks of obesity, including fatty liver, may lead to improved lifestyle behavior, thus halting the continuous rising incidence of NAFLD/NASH and its complications, such as cirrhosis or hepatocellular carcinoma.