Chronic liver disease occurs throughout the world irrespective of age, sex, region or race. Cirrhosis is an end result of a variety of liver diseases characterized by fibrosis and architectural distortion of the liver with the formation of regenerative nodules and can have varied clinical manifestations and complications. According to WHO, about 46% of global diseases and 59% of the mortality is because of chronic diseases and almost 35 million people in the world die of chronic diseases 1. Liver disease rates are steadily increasing over the years. According to National statistics in the UK, liver diseases have been ranked as the fifth most common cause of death 2. Liver diseases are recognized as the second leading cause of mortality amongst all digestive diseases in the US 3.

Global Burden of Disease (GBD) Project was formed by WHO to provide a consistent estimate of mortality and morbidity which varies by age, sex and region 4. To understand the burden of a certain disease, it is important to know its incidence, prevalence, mortality and morbidity including, impairment of quality of life and the direct or indirect cost expenditures. Knowledge of burden of a disease helps in establishment of public health priorities and in guiding prevention programs.

Global prevalence of cirrhosis from autopsy studies ranges from 4.5% to 9.5% of the general population 5, 6, 7. Hence, we estimate that more than fifty million people in the world, taking the adult population, would be affected with chronic liver disease. Globally, alcohol, NASH and viral hepatitis currently are the most common causative factors. Prevalence of cirrhosis is likely to be underestimated as almost a third of the  patients remain asymptomatic. With the use of non-invasive tests like transient elastography, a more realistic picture could emerge in the near future. During 2001, the estimated worldwide mortality from cirrhosis was 771,000 people, ranking 14th and 10th as the leading cause of death in the world and in developed countries, respectively 8. Deaths from cirrhosis have been estimated to increase and would make it as the 12th leading cause of death in 2020 9.

According to the WHO, alcohol consumption accounts for 3.8% of the global mortality and 4.6% of DALYs. Liver disease represents 9.5% of alcohol-related DALY’s worldwide, while individual rates vary in different regions. Alcohol is the main cause of liver-related death in Europe with highest mortality rates reported from France and Spain (approximately 30 deaths per 100,000 per year). There is a possibility of underestimation of mortality due to legal issues of documenting alcohol as primary cause of death. The lack of specificity of the national survey questionnaires also fails to allow accurate classification of liver diseases. Today, even in Asian countries like India, alcohol is emerging as the commonest cause of chronic liver disease 11. 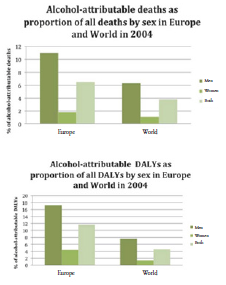 The burden of obesity has been steadily increasing with an estimated 1 billion people reported as overweight, and over 300 million people as  obese (WHO 2005 report) with a predicted increase to 1.5 billion by 2015. Globally, the prevalence of NASH ranges from 6% to 35%, with a median of 20% 12. Prevalence rates from China, India and Japan have been reported as 5%, 5-28% and 14%, respectively. Prevalence in the US, using non-invasive tests is reported to be as high as 10-35% but only 3-5% using liver biopsy 10. The data from NASH Clinical Research Network demonstrated that individuals with NAFLD have reduced QOL which was more pronounced in patients who had underlying cirrhosis, diabetes and obesity 13. 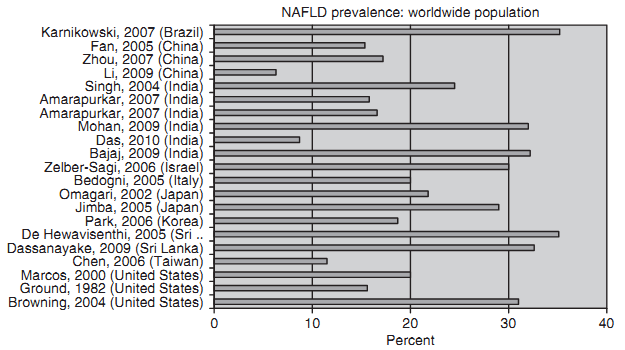 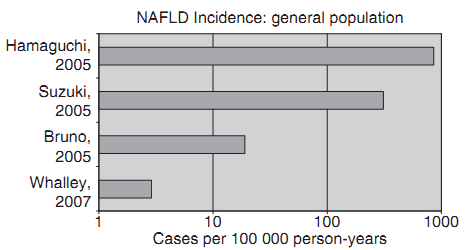 Most of these patients have underlying diabetes and obesity similar to that of patients with NASH, and represents end-stage NASH. Also, a fraction of cryptogenic cirrhosis cases may represent Autoimmune Hepatitis (AIH) in a “burnt-out” stage. The reported prevalence of HCC in patients of cryptogenic cirrhosis has ranged from 6.9-29% by various studies, and is gradually increasing 14.

This is one of the most common genetic diseases among persons of Northern European descent with the highest reported allele frequency for the homozygous C282Y of 6.4%-9.5% 17.

Globally, WD has been estimated to affect approximately 1 in 30,000 individuals, with higher incidence reported in parts of Asia, for instance India. Unfortunately, to date no community-based incidence and prevalence study has been reported from India. About 15-20 new cases of WD are registered annually at the WD specialty clinic in the National Institute of Mental Health and Neurosciences (NIMHANS), Bangalore 18.

This is the most common genetic liver disease in infants and children with reported prevalence of 1:1,600 to 1:2,800 babies born in the United States and Northern Europe. Given the low prevalence of these diseases, there are no national statistics available about mortality or economic burden associated with these conditions.

Cirrhosis is well recognized and the main cause of HCC, which has an annual global incidence of over half a million, and a 5 year survival of 10%. The incidence of this cancer has been steadily rising at an alarming rate, making HCC the 5th most common cancer in men and the 7th most common cancer in women in recent estimates. It is likely to contribute approximately 5.6% of all human cancers with a predicted increase in burden through 2020. Almost 85% of HCCs occur in the developing world. HCV-related HCC is the fastest rising cause of cancer related deaths in the developed countries 19. It accounts for 70% to 85% of primary liver cancers. With the rising incidence of NASH and metabolic syndrome, these are also becoming a major concern. Liver cancer was recognized as the 4th most common cancer in males and accounted for 37% of all infection-related cancers in females in a recent study from India 20. Data from 1992–2002 showed that combined liver and intrahepatic bile duct cancer ranked 12th in males and 18th in females with rates of 8.6 and 3.3 per 100,000 persons, respectively. The mortality rates for liver and intrahepatic bile duct cancers were still higher, ranking 10th for men and 13th for women. 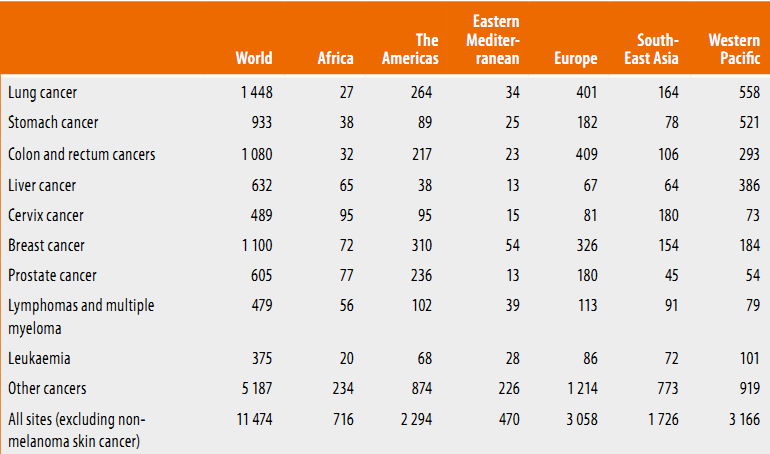