The “Hygiene Hypothesis” states that a lack of early childhood exposure to helminthic parasites and some symbiotic microorganisms increases susceptibility to immune mediated diseases 1. There even is evidence linking hygiene to an increased risk of developing autism and colon cancer. Strachan proposed a variant of this theory to explain the rise in allergies in 1989 2, although warnings of the potential “dangers” of hygiene had appeared many years previously.

Autoimmune and other immunologic diseases are highly prevalent in developed countries, which was not the case for many of these conditions at the turn of the 20th century. Included among the more than 100 such conditions are ulcerative colitis, Crohn’s disease, type 1 diabetes mellitus, asthma and multiple sclerosis. The National Institutes of Health estimates that perhaps 23.5 million Americans have one or more of these diseases. Perhaps 2 million Americans have inflammatory bowel disease. Immunologic diseases, like inflammatory bowel disease, are major factors driving the rise in health care costs in the United States.

Industrialization and growing opulence brings many striking environmental changes. Some of the benefits of improved living standards include clean water, pure food, indoor plumbing, modern day sanitation, cement sidewalks and vigilant health care with the use of antibiotics to control infectious diseases. Helminths are worm-like parasites, some of which have the potential to inhabit the human gastrointestinal track or other regions of the body. Improving living standards in industrialized countries brought environmental changes that have disrupted helminthic life cycles and have led to de-worming of the population. Before the 20th century, every individual likely had more than one helminthic infection and would carry these infections at least through childhood. This previously universal exposure has become rare in industrial countries. Less developed countries are now experiencing a similar phenomenon as standards of living continue to rise around the world.

Epidemiologic data support the association of the rise in immunologic diseases with the loss of helminthic infections. In the United States, the prevalence of hookworm in Georgia school children dropped from 65% in the 1910s to less than 2% in the 1980s 3,4. Trichinosis, whipworm (Trichuris trichiura) and pinworm (Enterobius vermicularis) infections declined similarly. Recent immigrants to the United States now account for most of the individuals harboring helminths. A major rise in the prevalence of inflammatory bowel diseases occurred over the same interval of time. Loss of helminth exposures also occurred in Western Europe corresponding with the spread of immune mediated diseases like inflammatory bowel disease. Whipworm infections in South Korean school children fell from about 75% in 1969 to 0.02% in 2004 5. During this time span, the incidence of ulcerative colitis in Seoul increased nearly six fold 6. The frequency of IBD now is about 1 in every 250 people in some regions 7,8.

The gut has a remarkable capacity to limit the intensity of mucosal immune reactivity. This is especially remarkable considering the vast array of luminal antigens and other immune stimulatory factors that daily encounter the mucosal surface. The intestinal immune system protects us from organisms and other foreign substances, but can carefully gate this response to prevent organ injury.

The causes of inflammatory bowel diseases are assumed to result from unnecessarily aggressive mucosal adaptive immune responses to substances residing in the gut lumen. Various genetic alterations modulate the risk for acquiring inflammatory bowel diseases 9. The genes in question mostly affect immune regulation, immune response, epithelial barrier defense and innate immune supporting our present hypothesis related to the causation of these conditions. The relative importance of these genes in the causation of IBD remains in question, since the majority of IBD patients do not express any of these genes, and most healthy individuals with similar gene alterations will never develop abnormal intestinal inflammation. The massive rise in the prevalence of inflammatory bowel disease in developed countries in the 20th century, and the present emergence of IBD in developing countries points the critical importance of environmental change in disease causation.

Helminthic infections are exceedingly strong inducers of regulatory immune circuits in their hosts 10. Inflammatory bowel disease likely is the consequence of immune dysregulation in which the regulatory side of the immune system cannot limit the immune response to luminal contents. Thus, helminthic infections are likely to help reduce the risk for IBD in susceptible individuals based on their capacity to strengthen these regulatory pathways.

Animal models of IBD suggest that regulatory-type T cells are important for maintaining mucosal immune homeostasis and for controlling enteritis 11. T cells that regulate immune responses are plentiful in the gut. Helminths induce expansion of regulatory T cell subsets within the intestinal mucosa and mesenteric lymph nodes of their hosts. They also enhance their regulatory capacity.

Their capacity to modulate multiple and distinct immune pathways within their hosts probably evolved as a consequence of many thousands of  years of close, intimate association. Taken together, all of these activities would be expected to have a power influence on host immunity affording strong benefit for the parasite and perhaps proving mutually beneficial for the host by limiting our risk for acquiring autoimmunity.

To exploit their ability to stimulate a wide range of immune regulatory activities within their hosts, clinical studies have used helminths as therapeutic agents with apparent success to treat ulcerative colitis, Crohn’s disease and other immunologic conditions 12. One of these agents, Trichuris suis, has received “Good Manufacturing Procedure” approval from the United States FDA and the European EMEA, and is now considered a pharmaceutical. This agent is undergoing extensive testing in large doubleblind, multi-centered clinical trials on both continents. The therapy consists of swallowing microscopic live pig whipworm ova (Figure 1), which hatch in the host. While it naturally colonizes pigs, it can cross species and colonize humans, abate for only a couple of months. The life cycle of this agent is restricted to the gastrointestinal track. While common on farms, there is no known human pathology caused by exposure to T. suis. The larvae that emerge from the ova can mature into adult worms in some of the human hosts, but remain quite small. Thus, this agent is ideally suited for application to human disease. 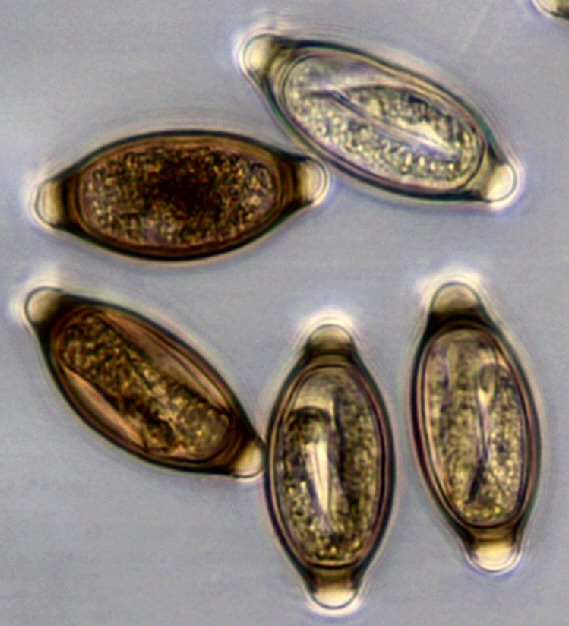