Is Fecal Microbiota Transplantation Through the Mid-Gut a Rescue Therapy for Refractory IBD?

The concept of using stool or extraction from fermented stool from a healthy donor to treat patients with gastrointestinal diseases actually dates back to ancient China 1700 years ago, when the stool matter was given orally to treat food poisoning and diarrheal diseases 1. In 1958, stool from the healthy donor was given by enema to treat four patients with pseudomembranous colitis, which was the first record in English literature 2. In recent years, fecal microbiota transplantation/transplant (FMT) using frozen fecal microbiota has been proven as effective with fresh feces for recurrent Clostridium difficile infection (CDI) 3. As a milestone in the history of using gut bacteria to treat diseases, FMT was for the first time classified as a guideline-proposed option for treating recurrent CDI in 2013 4. However, the therapeutic power of FMT may be not only for CDI. Increasing evidence has indicated the potential role of FMT to treat inflammatory bowel disease (IBD) 5, 6, although the reports of application of FMT to the management of severe IBD, especially for CD, have been very limited in the literature 7-9. We have  initiated an exploratory study to answer whether FMT could be a safe and effective rescue therapy for refractory IBD.

Since October 2012, we have performed FMT in more than 130 patients with refractory severe IBD (without CDI) under two registered clinical trials. We treated selected patients who had failed or were not suitable for biotherapeutics, immunosuppressant 5, steroids, aminosalicylic acid, and even surgery. At least one week prior to FMT, all treatments were discontinued including biotherapeutics, immunosuppressant,  steroids, and traditional Chinese medicine. One hour before FMT, intravenous injection of proton pump inhibitors and intramuscular injection  of metoclopramide were given. The stool suspension was infused into the midgut by gastroscope under anesthesia, nasojejunal tube or tube via stoma. Therefore, the route of transplantation was called mid-gut instead of duodenum. For some patients, midgut administration may be better  than that through the colon. For example, in some patients with severe UC the colon cannot hold the contents infused by colonoscopy. In others with CD, strictures may limit the colonoscopy and there is a risk of perforation. A single FMT through the mid-gut with a stable volume of  purified fecal microbiota is adequate for most of the refractory cases. A second FMT is done one week later for the very few patients who were steroid dependent and failed to respond to the first FMT. Otherwise, no more FMTs were necessary within a short period after the first FMT.

The overall rate of clinical improvement and clinical remission based on the clinical activity in the first month was over 80% and 70%,  respectively, which were higher than other assessment points within a 15-month follow-up. The body weight of patients increased after FMT,  and lipid profile improved as well. IBD related extraintestinal manifestations such as skin lesions also improved. FMT was a fast and significant effect in relieving Crohn’s colitis related abdominal pain. We have reported a case of severe refractory CD complicated with fistula and a large inflammatory mass that resolved after a single FMT as a rescue 9. This patient has had a sustained clinical, endoscopic remission for 18 months to date. The improved inflammatory and immunological markers suggest the successful remodeling of the gut microbiome and maintenance of immune homeostasis. There have been no severe adverse events during endoscopic infusion or during the follow-up after FMT. We established a standardized laboratory protocol and clinical work flow, including donor identification, purification of fecal microbiota, banking of frozen fecal microbiota, endoscopic infusion procedure and a clinical evaluation system. The “shotgun” sequencing indicates that the crudely purified fecal microbiota should be quite similar to original feces. The standardized fecal microbiota preparation and clinical flow significantly simplified the FMT.

It would be ideal to standardize FMT. If the purification of fecal microbiota can be technically controlled it might be more available; otherwise its application in the world would be restricted by health policy if there is no quality control. 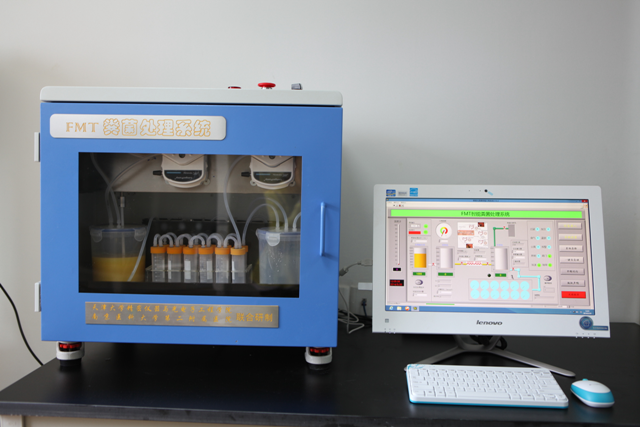 The best solution for this problem is to allow the procedures to be performed automatically with machines, GenFMTer. The latest news, from my team cooperating with Dr. Youquan Zhao and Dr. Huiquan Wang at Tianjin University Precision Instrument College in China, is the successful development of a new automatic system for purification of fecal microbiota from fresh feces. This will advance the standardized  FMT from a bio-safety cabinet to automatic instruments. The operator only needs to press the buttons related to the designated processes and all procedures can be done in less than a half an hour. Since we do not know the changing of fecal viable organism after the feces is expulsed from the colon, it may be the best way to transplant those microbiota back to the gut as soon as possible.

What Will We Do in the Future?

FMT has been used as a rescue therapy for refractory IBD in our center, treating patients from all over China. These patients generally had complicated IBD. However FMT should not be regarded as a pure technology when it is used for patients with severe diseases. Additionally, it remains unclear why some cases with IBD did not response to FMT.

Our clinical pilot demonstrates that FMT through the mid-gut may be a safe, feasible and efficient rescue therapeutic option for refractory IBD. In the future, multi-center randomized clinical trials should be done. Also, more studies are needed to focus on mechanisms, indications,  methodology, cost-effectiveness analysis and long-term safety. As an effective, safe and economic therapy, FMT may be moved into the mainstream of IBD treatment sometime in the future.