Chronic hepatitis C virus (HCV) infection represents a global public health burden which is associated with significant morbidity and mortality. The worldwide prevalence is estimated at 170 million individuals, with the highest concentration observed in sub-Saharan Africa, South-East Asia, and the Western Pacific 1-2. Chronic HCV infection represents one of the leading causes of chronic liver disease, and places individuals at risk for progressive liver fibrosis and cirrhosis, hepatocellular carcinoma, and liver-related death. Following initial infection, approximately 70% develop chronic infection, of whom an estimated 20% will progress to liver cirrhosis, and 5% will die from cirrhosis or liver cancer. More than 15,000 and 350,000 individuals in the United States (U.S.) and worldwide, respectively, die of  HCV-related liver disease each year, and this is expected to increase significantly over the next 10-20 years 2-3.

Based on World Health Organization (WHO) estimates, the highest prevalence of chronic HCV infection is seen in Africa (5.3% or 31.9  million individuals), the Eastern Mediterranean (4.6% or 21.3 million), and the Western Pacific (3.9% or 62.2 million), with a lower prevalence observed in South-East Asia (2.15% or 32.3 million), the Americas  (1.7% or 13.1 million), and Europe (1.03% or 8.9 million). Countries with the highest rates of chronic infection include Egypt (22%) and two of the world’s most populous nations, China and Pakistan, where >3% of the population are infected (Table 1). Globally, key risk factors for HCV transmission include blood transfusion from unscreened donors, unsafe therapeutic injections, and health care-related procedures, particularly in the developing world, whereas injection drug use has remained  the predominant source of new infections in most developed countries 1. In the U.S., the Centers for Disease Control and Prevention (CDC)  recently modified its screening recommendations for hepatitis C to expand beyond individuals with known risk factors to a broader population of “baby boomers” born between 1945-1965, a strategy that has been found to be cost-effective and may identify an additional 800,000 infected individuals 4-5.

Table 1: Global Prevalence of Hepatitis C by WHO Region.

Significant progress has been made over the past 15 years in our ability to eradicate chronic HCV infection. In 2001, the combination regimen  of pegylated interferon alfa (peg-IFN) plus ribavirin (RBV) emerged as a new global standard of care which was associated with a sustained virologic response (SVR) in approximately 40%, 50%, and 75% of genotypes 1, 4, and 2-3, respectively. However, this regimen has been limited by high complexity, financial cost, and significant adverse effects, thus limiting its uptake in resource-limited settings outside major developed countries; even in the U.S. and Europe, it is estimated than fewer than 20% have undergone antiviral therapy 6. 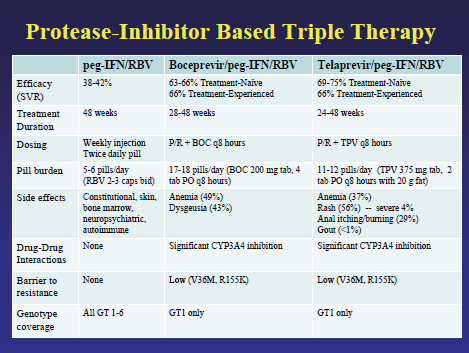 Telaprevir and boceprevir represent only the first generation of a large number of oral DAA’s which have demonstrated remarkable promise in the suppression of HCV replication. It seems likely that triple therapy regimens with either telaprevir or boceprevir will be the best available therapy until at least 2014. Several second-generation agents are now entering phase 3 trials and provide hope for even greater increases in safety and efficacy in both treatmentnaïve and treatment-experienced individuals. Current triple therapy regimens with DAA remain limited by  the requirement for peg-IFN and RBV, complex and burdensome response-guided regimens, restriction to genotype 1-infected individuals, and less than optimal SVR rates in prior nonresponders to pegylated interferon-ribavirin. Phase 2 data from trials evaluating next generation protease inhibitors, nucleos(t) ide and non-nucleos(t)ide polymerase inhibitors, NS5A inhibitors, novel interferons, therapeutic vaccines, and cyclophilin inhibitors suggest that the next shift in the hepatitis C treatment paradigm is likely to be characterized by further increases in SVR,  decreased pill burden, once or twice daily oral regimens, shorter treatment duration, more favorable safety profiles, and broader genotype coverage. Although it is possible that quadruple therapy regimens combining two DAAs plus peginterferon plus ribavirin will be necessary for some patients with poor interferon sensitivity and multiple negative predictors of viral response, the ultimate goal of future HCV therapy will be interferon-free combination regimens of two or more oral DAAs with or without ribavirin which achieve high levels of SVR in both treatment-naïve and treatment-experienced individuals. In 2011, a landmark paper by Lok et al. provided the first proof-of-principle that SVR  can be achieved with two DAAs without interferon (NS5A inhibitor daclatasvir plus protease inhibitor asunaprevir), moreover, in a cohort of highly refractory patients who were prior null responders to peg-IFN and RBV 14. In 2012, additional reports from phase 2 trials provided  further confirmation that SVR can be achieved without interferon; two studies evaluating the role of a quadruple oral regimen for 12 weeks (ritonavir-boosted protease inhibitor ABT-450, non-nucleoside polymerase inhibitor ABT-333, and ribavirin) and a dual oral regimen for 24 weeks (nucleotide polymerase inhibitor GS-7977 plus NS5A inhibitor daclatasvir) demonstrated SVR rates of 95% and 100%, respectively  (Table 3) 15. These promising results unequivocally provide a foundation for further exploration of interferon-free regimens as a viable future  strategy for HCV treatment, and spur hope that such regimens may become available within the next 3-5 years. 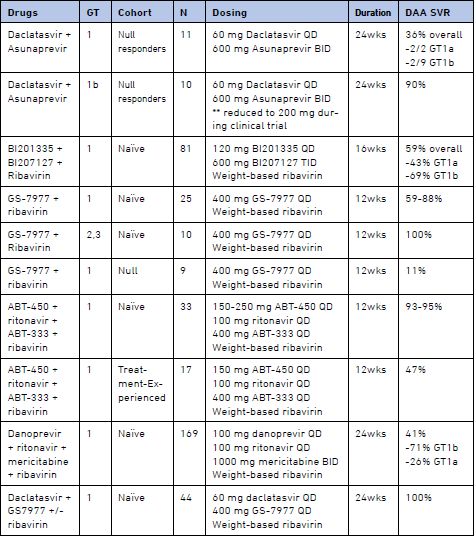 Although DAA-based antiviral therapy has been widely adopted in developed countries with access to first-generation protease inhibitors, these new antiviral drugs will unlikely benefit resource-limited settings in the short term. Logistical constraints related to peg-IFN  administration, high treatment complexity, substantial pill burden, prohibitive cost, significant adverse effects, and access to specialty providers all remain important barriers to broader utilization. It is hoped that simpler, shorter, safer, and more effective oral-only regimens eliminating peg-IFN may provide a critical step in drug development to permit global expansion of HCV treatment. In a similar manner as witnessed in the expansion of antiretroviral therapy for HIV, strategic partnerships between manufacturers, government agencies, specialty and advocacy  organizations, and non-governmental organizations (NGOs) will have a historic opportunity to provide the financial support and political will required to achieve truly worldwide access to HCV therapy, and fundamentally alter the global burden of this infection.