Coping with Common GI Symptoms in the Community:

A Global Perspective on Heartburn, Constipation, Bloating, and Abdominal Pain/Discomfort 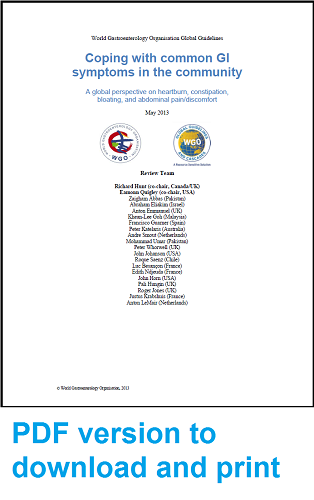 This guideline on a World Digestive Health Day (WDHD) theme is the first to take four key gastrointestinal (GI) symptoms as its starting-point: heartburn, abdominal pain/discomfort, bloating, and constipation. It is also unique in featuring four levels of care in a cascade approach: self-care and “over-the-counter” aids; the pharmacist’s view; the perspective of the primary care doctor—where symptoms play a primary role in patient presentation; and the specialist. The aim is to provide another unique and globally useful guideline that helps in the management of common, troubling but not disabling GI complaints. A team of gastrointestinal and primary care experts, as well as the International Pharmaceutical Federation (FIP), were involved in the creation of the guideline.

GI symptoms—with the possible exception of heartburn—usually occur as chronic or recurrent complaints attributed to the pharynx, esophagus, stomach, biliary tract, intestines, or anorectum. While some data are available on the epidemiology of individual symptoms, there are more on the symptom clusters or aggregations known as functional gastrointestinal disorders (FGIDs)—disorders as yet not explained by structural or biochemical abnormalities. These disorders affect a large segment of the population, and comprise a large proportion of primary care and gastroenterology practice. A categorization of these symptoms into discrete functional gastrointestinal disorders has been developed in a multinational consensus in accordance with predefined symptom criteria [1].

Relatively few data are available on the epidemiology of individual symptoms (with the exception of constipation), although there are considerable data on FGID syndromes. The latter are frequently used as a surrogate for the former throughout this guideline—e.g., gastroesophageal reflux disease (GERD) for heartburn, irritable bowel syndrome (IBS) for abdominal pain/bloating.

In addressing any disorder in the community, it is important to distinguish between diagnosed and undiagnosed GI problems; there is a huge reservoir of people who have problems and who have not been given a specific diagnosis by their clinician [2]. In dyspepsia, there is evidence that only 50% of sufferers actually consult their doctor [3]. The reasons for consultation may be determinants of management.

Local or regional disease epidemiology is relevant to the management of these GI problems: the prevalence of parasitic diseases such as worms, Giardia, and viruses, as well as the incidence of malignant diseases, need to be considered. For example, in Mexico, giardiasis; in South-East Asia, hepatitis viruses; and in the southern regions of the Andes, gastric and gallbladder cancer need to be considered in the differential diagnosis.

There are also cultural and religious aspects that modify the patient’s response to symptoms: the Japanese population is recognized for being pain-tolerant; in other cultures, showing resistance to pain or other complaints may be regarded as a sort of sacrifice that can be beneficial for the soul and future life. Coping with environmental or psychological stressors such as war, migration, starvation, sexual abuse, or bullying may be very important in the causation of diseases and symptoms. Finally, in some cultures, spicy foods are a real issue.

Between-country variations in the occurrence rates for abdominal symptoms must be interpreted with caution; they may also reflect differences in culture, language, or expression, as well as study methods [4].

In 1993, Drossman et al. [1] reported data from a householder survey in the United States on the prevalence of 20 functional gastrointestinal disorders, based on the fulfillment of multinational diagnostic (Rome) criteria.

Functional GI symptoms do occur in Africa, but it is evident that there are large gaps in the data [26–28].

The World Gastroenterology Organisation (WGO) has developed diagnostic and treatment cascades for the WGO guidelines in order to provide resource-sensitive recommendations rather than focusing on a gold standard. However, for this guideline, a different approach has been chosen, based on the point of care: from selfcare to pharmacist, general practitioner/family physician, and finally, GI specialist. For the GI specialist, no extensive instructions are provided here, as sufficient sources are available on the Internet and in the published literature; references are provided throughout this guideline.

Patients who are taking medications should consult a pharmacist to see whether the self-medication options mentioned in this document have any labeled contraindications or known interactions with other drugs they may be taking. In some countries, OTC medicines are only available through community pharmacies. In most countries in the world, pharmacists can only recommend OTC medicines (as they do not have prescribing rights) to help patients, while in some other countries there is an intermediate class of medicines: pharmacy-only medicines. It is therefore often challenging to distinguish between management decisions that are based on a pharmacist’s recommendation and those that are truly a choice of self-care. To resolve this issue, both the process (self-care vs. pharmacist-driven) and the solution have been considered here (OTC medicines in both cases).

Still, it should be taken into account that pharmacists systematically review medications for two purposes:

Increasing evidence suggests that dietary [29], lifestyle, cognitive, emotional/behavioral, and broader psychosocial factors may all play a role in the etiology, maintenance, and clinical effectiveness of treatments for functional GI disorders [30].

In interpreting the common symptoms considered in this guideline, a diagnosis of a functional gastrointestinal disorder can be made if the patient’s symptoms are consistent with published diagnostic criteria for a given FGID [31] in the absence of a history suggestive of any structural (organic) diagnosis that might provide an alternative explanation for the symptoms (see below). Age and gender (with no significant interaction) are the most clinically relevant variables.

The following sections (2.2 and 2.3) provide guidance on evaluating and monitoring the four principal symptoms discussed in this guideline.

It should be noted that not all common GI symptoms are functional. This concept is particularly relevant for the symptom of heartburn. Most patients presenting with heartburn have gastroesophageal reflux disease (GERD), with or without visible lesions in the esophageal mucosa. According to the Rome III consensus, even endoscopically normal patients with heartburn are diagnosed as having reflux disease as long as there is evidence that their symptoms are caused by the reflux of gastric contents. This constitutes the diagnosis of nonerosive reflux disease (NERD). These patients do not have a functional GI disorder. Only when heartburn occurs in the absence of mucosal lesions, abnormal esophageal acid exposure, and a positive symptom–reflux association during reflux monitoring, and when it does not respond to acid-suppressive treatment, is it regarded as functional, and only then can a diagnosis of “functional heartburn” be made [33].

Fig. 1 Self-care algorithm for heartburn (reproduced with permission from Berardi 2009 [48]). 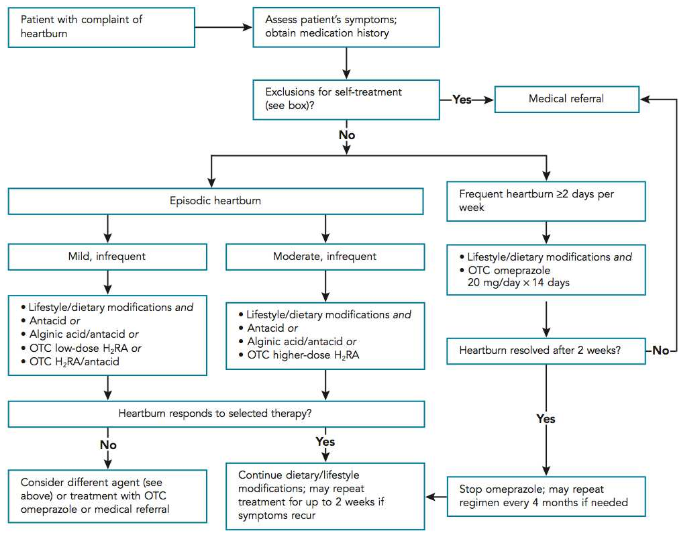 N.B.: some of the OTC options are not available in all countries.

Full details of the specialist management of heartburn are beyond the scope of this guideline, and the reader is referred to the relevant guidelines on the management of GERD [49,50]. 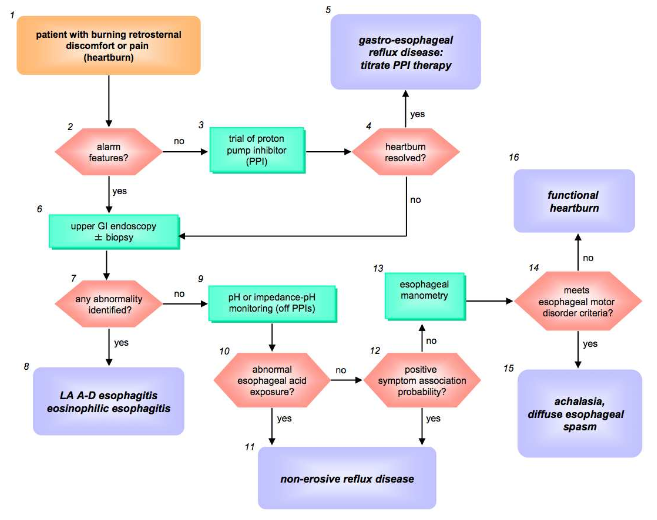 Fig. 3 The prevalence of abdominal cramping and pain in all age groups in the general population. Source: Quigley et al. 2006 [4]. 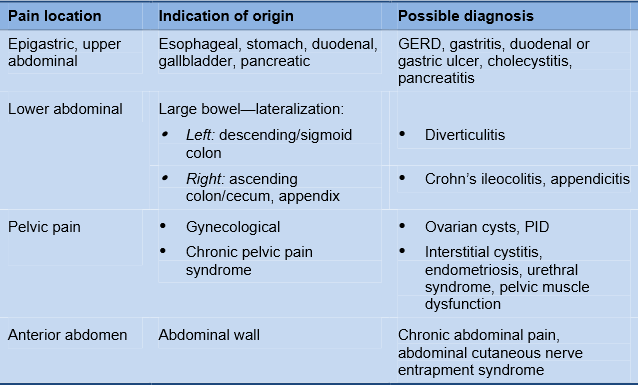 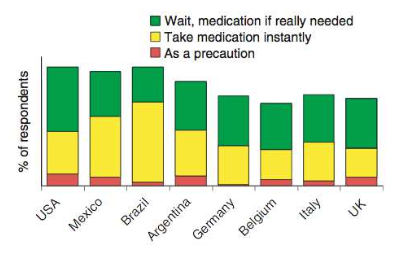 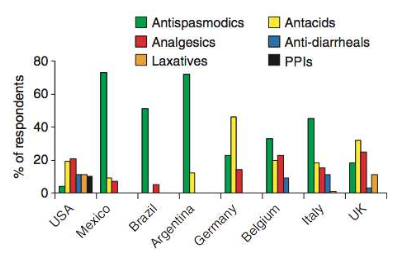 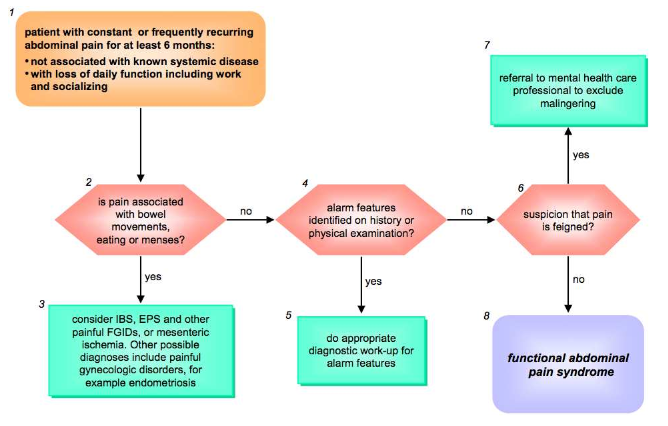 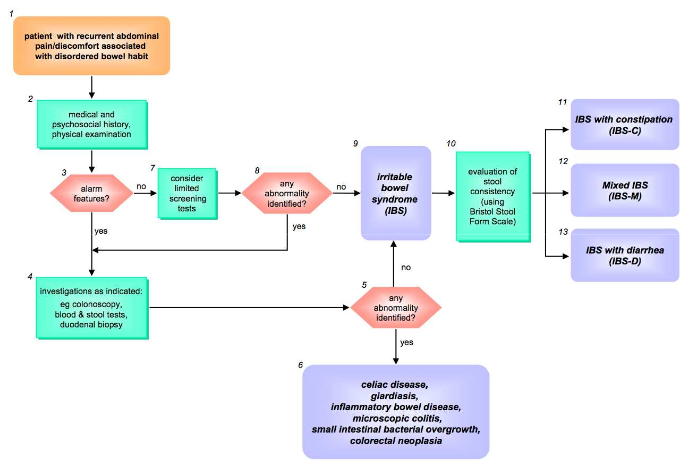 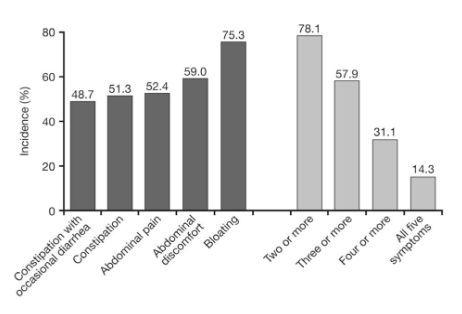 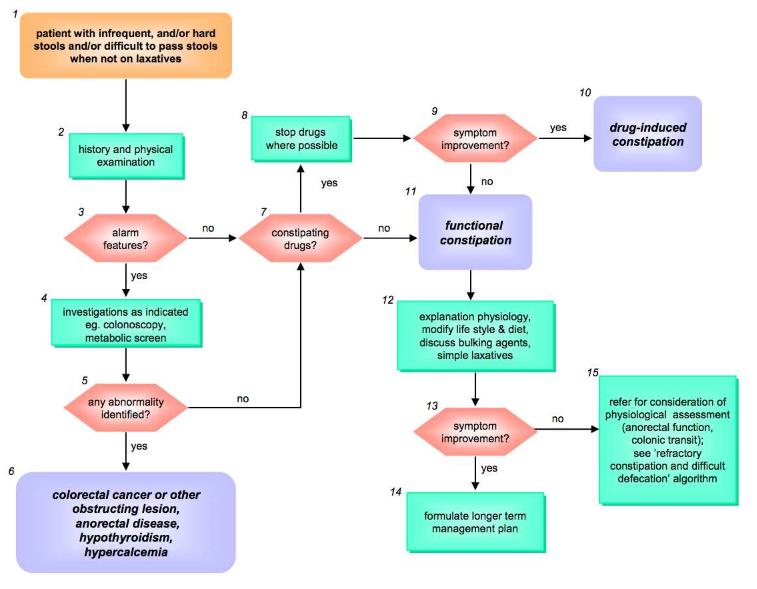