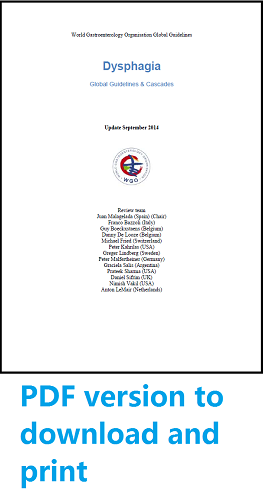 Dysphagia refers either to the difficulty someone may have with the initial phases of a swallow (usually described as “oropharyngeal dysphagia”) or to the sensation that foods and or liquids are somehow being obstructed in their  passage from the mouth to the stomach (usually described as “esophageal dysphagia”). Dysphagia is thus the perception that there is an impediment to the normal passage of swallowed material.  Food impaction [1] is a special symptom that can occur intermittently in these patients.

Oropharyngeal swallowing is a process that is governed by the swallowing center in the medulla, and in the mid-esophagus and distal esophagus by a largely autonomous peristaltic reflex coordinated by the enteric nervous system. Table 1 lists the physiological mechanisms involved in these various phases.

Table 1 The physiological mechanisms involved in the stages of swallowing, by phase 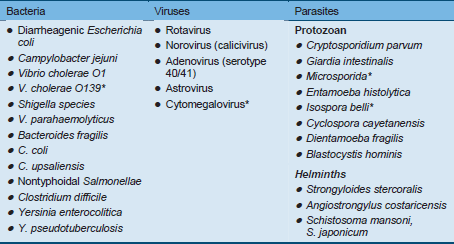 A key decision is whether the dysphagia is oropharyngeal or esophageal. This distinction can be made confidently on the basis of a very careful history, which provides an accurate assessment of the type of dysphagia (oropharyngeal vs. esophageal) in about 80–85% of cases [2]. More precise localization is not reliable. Key features to consider in the medical history (specifics are discussed below) are:

Although the conditions can frequently occur together, it is also important to exclude odynophagia (painful swallowing). Finally, a symptom-based differential diagnosis should exclude globus pharyngeus (a “lump in the throat” sensation), chest pressure, dyspnea, and phagophobia (fear of swallowing).

When one is trying to establish the etiology of dysphagia, it is useful to follow the same classification adopted for symptom assessment—that is, to make a distinction between causes that mostly affect the pharynx and proximal esophagus (oropharyngeal or “high” dysphagia), on the one hand, and causes that mostly affect the esophageal body and esophagogastric junction (esophageal or “low”  dysphagia), on the other. However, it is true that many disorders overlap and can produce both oropharyngeal and esophageal dysphagia. Thorough history-taking, including medication use, is very important, since drugs may be involved in the pathogenesis of dysphagia.

In young patients, oropharyngeal dysphagia is most often caused by muscle diseases, webs, or rings. In older people, it is usually caused by central nervous system disorders, including stroke, Parkinson disease, and dementia. Normal aging may cause mild (rarely symptomatic [3]) esophageal motility abnormalities. Dysphagia in the elderly patient should not be attributed automatically to the normal aging process.

Generally, it is useful to try to make a distinction between mechanical problems and neuromuscular motility disturbances, as shown below.

Within 3 days of stroke, 42–67% of patients present with oropharyngeal dysphagia—making stroke the leading cause of dysphagia. Among these patients, 50% aspirate and one-third develop pneumonia that requires treatment [4]. The severity of the dysphagia tends to be associated with the severity of the stroke. Dysphagia screening in stroke patients is critical in order to prevent adverse outcomes related to aspiration and inadequate hydration/nutrition [5].

Up to 50% of Parkinson patients show some symptoms consistent with oropharyngeal dysphagia, and up to 95% are found to have abnormalities on video esophagography [6,7]. Clinically significant dysphagia may occur early in Parkinson disease, but it is more usual in the later stages. 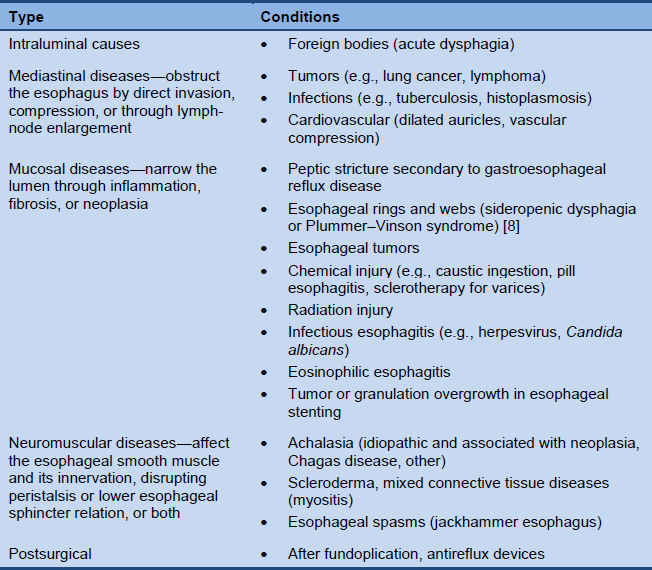 A gold standard approach is only feasible if the full range of diagnostic tests and medical treatment options are available. Such resources for the diagnosis and management of dysphagia may not be sufficiently available in every country. The World Gastroenterology Organisation (WGO) guidelines provide a resource-sensitive approach in the form of diagnostic and treatment cascades.

A WGO cascade is a hierarchical set of diagnostic, therapeutic, and management options for dealing with risk and disease, ranked by the resources available.

Dysphagia is a common problem. One in 17 people will develop some form of dysphagia in their lifetime. A 2011 study in the United Kingdom reported a prevalence rate of 11% for dysphagia in the general community [9]. The condition affects 40–70% of patients with stroke, 60–80% of patients with neurodegenerative diseases, up to 13% of adults aged 65 and older and > 51% of institutionalized elderly patients [10,11], as well as 60–75% of patients who undergo radiotherapy for head and neck cancer.

The disease burden of dysphagia is clearly described in a 2008 congressional resolution in the United States [12], which notes that:

Epidemiological data are difficult to provide on a global basis, since the prevalence of most diseases that may cause dysphagia tends to differ between regions and continents. Only approximations are therefore possible at the global level. Prevalence rates also vary depending on the patients’ age, and it should also be remembered that the range of disorders associated with childhood dysphagia differs from that in  older age groups. In younger patients, dysphagia often involves accident-related head and neck injuries, as well as cancers of the throat and mouth. Dysphagia generally occurs in all age groups, but its prevalence increases with age.

Tumor prevalence differs in various countries. In the United States and Europe, for instance, adenocarcinoma is the most common type of esophageal cancer, whereas in India and China it is squamous cell carcinoma. Similarly, corrosive strictures of the esophagus (with individuals consuming corrosive agents with suicidal intent) and tuberculosis can also be important aspects in non-Western settings.

An accurate history covering the key diagnostic elements is useful and can often establish a diagnosis with certainty. It is important to carefully establish the location of the perceived swallowing problem: oropharyngeal vs. esophageal dysphagia.

Oropharyngeal dysphagia can also be called “high” dysphagia, referring to oral or pharyngeal locations. Patients have difficulty in initiating a swallow, and they usually identify the cervical area as the area presenting a problem.

In neurological patients, oropharyngeal dysphagia is a highly prevalent comorbid condition associated with adverse health outcomes including dehydration, malnutrition, pneumonia, and death. Impaired swallowing can cause increased anxiety and fear, which may lead to patients avoiding oral intake—resulting in malnutrition, depression, and isolation.

Precise diagnosis is possible when there is a definite neurological condition accompanying the oropharyngeal dysphagia, such as:

Tests for evaluating dysphagia can be chosen depending on the patient’s characteristics, the severity of the problem, and the available expertise. Stroke patients should be screened for dysphagia within the first 24 hours after the stroke and before oral intake, as this leads to a threefold reduction in the risk of complications resulting from dysphagia. Patients with persistent weight loss and recurrent chest infections should be urgently reviewed [21].

A bedside swallow evaluation protocol has been developed by the American Speech-Language-Hearing Association (ASHA); a template is available at http://www.speakingofspeech.info/medical/BedsideSwallowingEval.pdf. This inexpensive bedside tool provides a detailed and structured approach to the mechanisms of oropharyngeal dysphagia and its management, and it may be useful in areas with constrained resources.

The algorithm shown in Fig. 1 provides an indication of more sophisticated tests and procedures that are needed in order to pursue a diagnostic investigation leading to specific therapies. 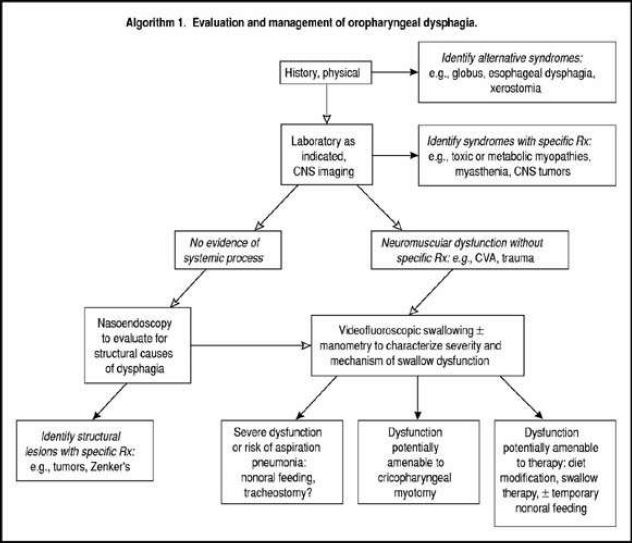 The most common conditions associated with esophageal dysphagia are:

Esophageal dysphagia can also be called “low” dysphagia, referring to a probable location in the distal esophagus—although it should be noted that some patients with forms of esophageal dysphagia such as achalasia may perceive it as being located in the cervical region, mimicking oropharyngeal dysphagia.

Halitosis is a very nonspecific sign that may suggest advanced achalasia or longterm obstruction, with accumulation of slowly decomposing residues in the esophageal lumen.

The clinical history is the cornerstone of evaluation and should be considered first. A major concern with esophageal dysphagia is to exclude malignancy. The patient’s history may provide clues. Malignancy is likely if there is:

On the other hand, achalasia is more likely if:

Eosinophilic esophagitis is more likely if there is:

The medical history is the basis for initial testing. Patients usually require early referral, since most will need an endoscopy. The algorithm shown in Fig. 2 outlines management decision-making on whether endoscopy or a barium swallow should be the initial test employed. 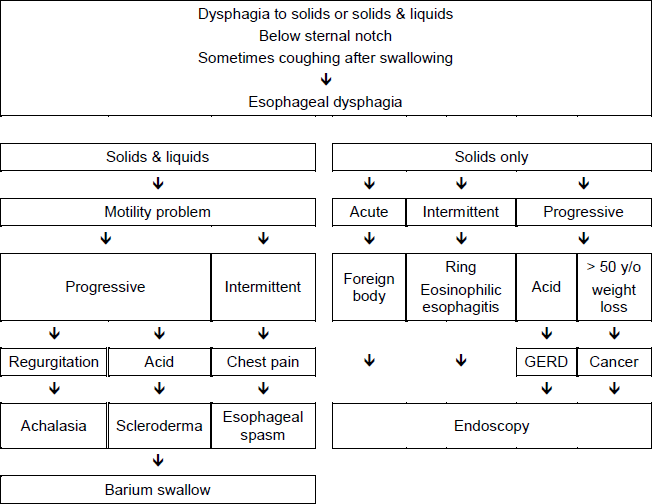 Tables 3 and 4 provide alternative diagnostic options for situations with limited resources, medium resources, or “state of the art” resources.

The goals of treatment are to improve the movement of food and drink and to prevent aspiration. The cause of the dysphagia is an important factor in the approach chosen.

The management of complications is of paramount importance. In this regard, identifying the risk of aspiration is a key element when treatment options are being considered. For patients who are undergoing active stroke rehabilitation, therapy for dysphagia should be provided to the extent tolerated. Simple remedies may be important—e.g., prosthetic teeth to fix dental problems, modifications to the texture of liquids [32] and foodstuffs [33], or a change in the bolus volume.

Acute dysphagia requires immediate evaluation and intervention. In adults, the most common cause is food impaction. There may be an underlying component of mechanical obstruction. Immediate improvement is seen after removal of the impacted food bolus. Care should be taken to avoid the risk of perforation by pushing down the foreign body.

A list of management options for esophageal dysphagia that may be taken into consideration is provided in Table 6. 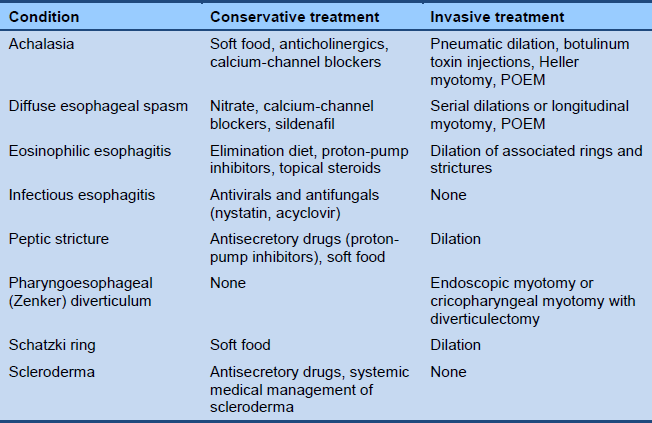 Peptic strictures are usually the result of gastroesophageal reflux disease (GERD), but strictures can also be caused by medication. The differential diagnosis has to exclude:

When the stricture has been confirmed endoscopically, gradual dilation [39,40] with a Savary bougie is the treatment of choice. Balloon dilation is an alternative option, but it may be riskier. 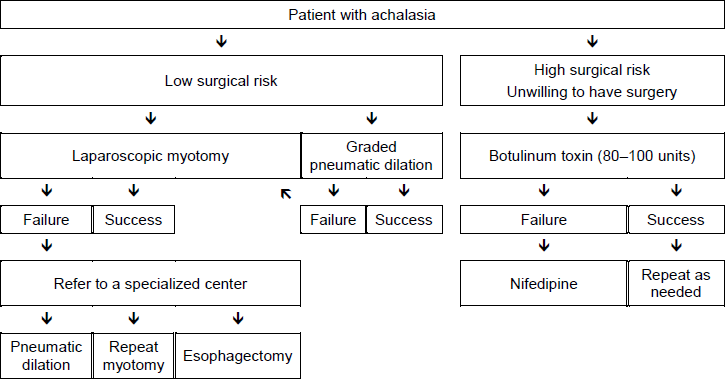