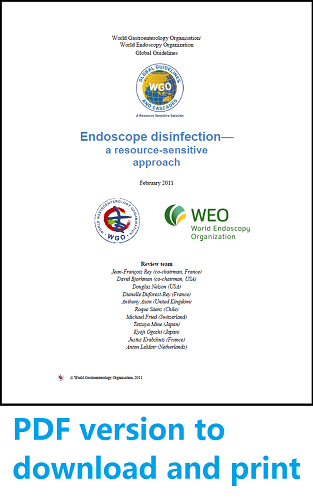 Esophageal varices are Porto-systemic collaterals — i.e., vascular channels that link the portal venous and the systemic venous circulation. They form as a consequence of portal hypertension (a progressive complication of  cirrhosis), preferentially in the sub mucosa of the lower esophagus. Rupture and bleeding from esophageal varices are major complications of portal hypertension and are associated with a high mortality rate. Variceal bleeding accounts for 10–30% of all cases of upper gastrointestinal bleeding.

A gold standard approach is feasible for regions and countries where the full scale of diagnostic tests and medical treatment options are available for the management of esophageal varices. However, throughout much of the world, such resources are not available. With Diagnostic and Treatment Cascades the WGO Guidelines provide a resource sensitive approach.

Cascade: a hierarchical set of alternative diagnostic, therapeutic and management options to deal with risk and disease - ranked by resources available.

Although varices may form in any location along the tubular gastrointestinal tract, they most often appear in the distal few centimeters of the esophagus. Approximately 50% of patients with cirrhosis develop gastroesophageal varices. Gastric varices are present in 5–33% of patients with portal hypertension.

Table 1 Epidemiology of esophageal varices and correlation with liver disease

The presence of gastroesophageal varices correlates with the severity of liver disease. The severity of cirrhosis can be scored using the Child–Pugh classification system (Table 2).

Table 2 Child-Pugh classification of the severity of cirrhosis

A cirrhosis patient who does not have varices has not yet developed portal hypertension, or his or her portal pressure is not yet high enough for varices to develop. As portal pressure increases, the patient may progress to having small varices. With time, and as the hyperdynamic circulation increases, blood flow through the varices will increase, thus raising the tension in the wall. Variceal hemorrhage resulting from rupture occurs when the expanding force exceeds the maximal wall tension. If there is no modification in the tension of the wall, there will be a high risk of recurrence. 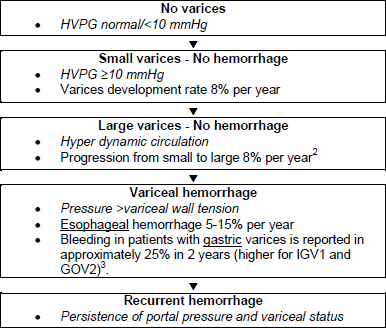 An international normalized ratio (INR) score > 1.5, a portal vein diameter of > 13 mm, and thrombocytopenia have been found to be predictive of the likelihood of varices being present in cirrhotics. If none, one, two, or all three of these conditions are met, then < 10%, 20–50%, 40–60%, and > 90% of the patients are estimated to have varices, respectively. The presence of one or more of these conditions represents an indication for endoscopy to search for varices and carry out primary prophylaxis against bleeding in cirrhotic patients (Table 4). 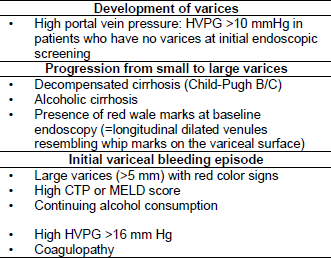 Esophagogastroduodenoscopy is the gold standard for the diagnosis of esophageal varices. If the gold standard is not available, other possible diagnostic steps would be Doppler ultrasonography of the blood circulation (not endoscopic ultrasonography). Although this is a poor second choice, it can certainly demonstrate the presence of varices. Further alternatives include radiography/barium swallow of the  esophagus and stomach, and portal vein angiography and manometry.

It is important to assess the location (esophagus or stomach) and size of the varices, signs of imminent, first acute, or recurrent bleeding, and (if applicable) to consider the cause and severity of liver disease. 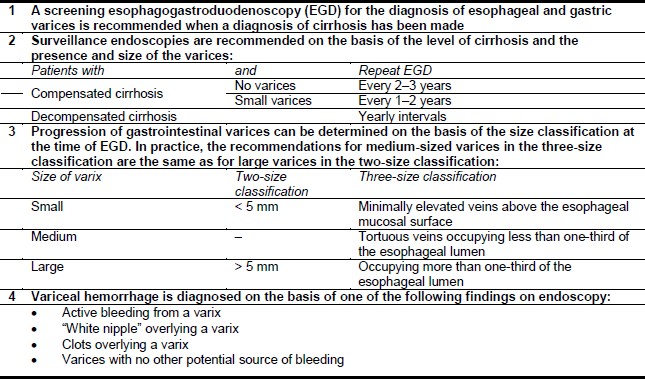 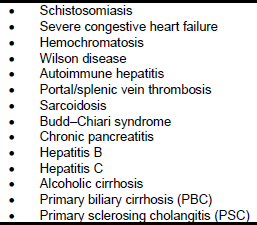 Note: all of these lead to the development of esophageal varices as a result of portal hypertension.

Schistosomiasis is the most common cause of varices in the setting of developing countries — in Egypt or the Sudan, for example. In absolute numbers, it may be a more common cause than liver cirrhosis. In the Sudan, there are villages in which over 30% of the population have varices. Their liver function is well maintained. They rarely decompensate and do not develop hepatocellular carcinoma (HCC). Bleeding from varices is the main cause of death in these patients. If the varices are eradicated, the patients can survive more than 25 years.

Table 7 - Considerations in the diagnosis, prevention, and management of esophageal varices and variceal hemorrhage

3. Management of Varices and Hemorrhage

The following treatment options are available in the management of esophageal varices and hemorrhage (Tables 8 and 9). Although they are effective in stopping bleeding, none of these measures, with the exception of endoscopic therapy, has been shown to affect mortality. 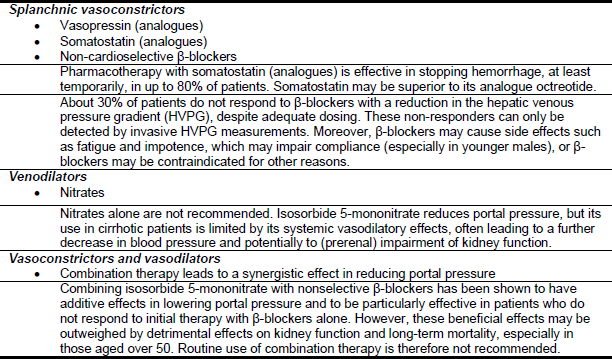 The approach in patients with cirrhosis and various stages of varices/hemorrhage is shown in the following figures.

Figure 2 - Patients with cirrhosis but no varices. EGD, esophago-gastroduodenoscopy

Figure 3 - Patients with cirrhosis and small varices, but no hemorrhage.

*Because many patients do not respond to β-blocker treatment or bleeding prophylaxis, it is recommended that EGD be repeated after 2 years (as for those not receiving β-blockers).

Figure 4 - Patients with cirrhosis and medium or large varices, but no hemorrhage. EVL, endoscopic variceal ligation.

Terlipressin is currently available in much of Europe, India, Australia, and the UAE, but not in the United States or Canada.

Figure 6 – Patients with cirrhosis who have recovered from acute variceal hemorrhage.

Recommendations for first-line management of cirrhotic patients at each stage in the natural history of varices (Fig. 7) 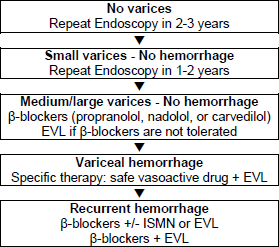 A cascade is a hierarchical set of diagnostic or therapeutic techniques for the same disease, ranked by the resources available.

As outlined above, several therapeutic options are effective in most clinical situations involving acute variceal hemorrhage, as well as in secondary and primary prophylaxis against it. The optimal therapy in an individual setting very much depends on the relative ease of local availability of these methods and techniques. This is likely to vary widely in different parts of the world.

If endoscopy is not readily available, one has to resort to pharmacotherapy in any case of suspected variceal bleeding — e.g., in patients with hematemesis and signs of cirrhosis. Similarly, pharmacological therapy might be administered in circumstances such as primary prophylaxis in a cirrhotic patient with signs of portal hypertension (splenomegaly, thrombocytopenia) and/or impaired liver function, and as secondary prophylaxis in a cirrhotic patient with a history of upper gastrointestinal bleeding. If pharmacotherapy is also not available and variceal bleeding is suspected, one must resort to general resuscitation measures and transport the patient as soon a possible to an institution where the necessary diagnostic/therapeutic means are available; balloon tamponade could be extremely helpful in such a situation.

Figure 8 – Cascade for the treatment of acute esophageal variceal hemorrhage.

Note: The combination of band ligation and sclerotherapy is not routinely used except when the bleeding is too extensive for a vessel to be identified for banding. In such cases, sclerotherapy can be carried out in order to control the bleeding and clear the field sufficiently for banding to be done afterward.

Caution: There are many conditions that can lead to esophageal varices. There are also many treatment options, depending on the resources available. For a resourcesensitive approach to treatment in Africa, for example, Fedail (2002) can be consulted.

Note: therapy with vasoactive drugs is unrealistic in most developing countries. In the Sudan, for example, 1 mg terlipressin (Glypressin) costs the equivalent of 25% of the salary of a house physician and about the same as a year’s salary for a government employee.