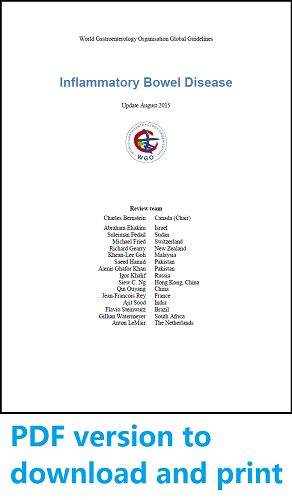 Inflammatory bowel disease (IBD) is a group of idiopathic chronic inflammatory intestinal conditions. The two main disease categories are Crohn’s disease (CD) and ulcerative colitis (UC), which have both overlapping and distinct clinical and pathological features.

The pathogenesis of IBD is incompletely understood. Genetic and environmental factors such as altered luminal bacteria and enhanced intestinal permeability play a role in the dysregulation of intestinal immunity, leading to gastrointestinal injury.

The prevalence of CD appears to be higher in urban areas than in rural areas, and also higher in higher socio-economic classes. Most studies show that when the incidence first starts to increase, it is mostly among those of higher social class, but that the disease becomes more ubiquitous with time.

If individuals migrate to developed countries before adolescence, those initially belonging to low-incidence populations show a higher incidence of IBD. This is particularly true for the first generation of these families born in a country with a high incidence.

The presentations of CD and UC are quite similar in such disparate areas of the world as North America, South America, Europe, Australia, and New Zealand: CD is distinguished from UC by disease proximal to the colon, perineal disease, fistulas, histologic granulomas, and full-thickness as opposed to mucosa-limited disease. In CD, granulomas are evident in up to 50% of patients and fistulas in 25%.

However, there are also differences in presentation between the East and the West. In East Asia, there is a higher prevalence of males with CD, ileocolonic CD, less familial clustering, lower rates of surgery, and fewer extraintestinal manifestations. Primary sclerosing cholangitis (PSC) associated with UC is less prevalent. Overall, the need for surgery is lower in Asian patients, at around 5–8%. However, there is a high rate of penetrating disease and perianal disease in Asia even at diagnosis, suggesting that complicated disease behavior is not uncommon in East Asia [3,10–12].

In Pakistan, there is much less extraintestinal disease in both UC and CD than is reported from the West (where up to 25% of patients have extraintestinal manifestations, if arthralgia is included). In Pakistan, few patients have perianal or fistulizing disease. In India, the age at presentation of CD is a decade later than in the West, colonic involvement is more common, and fistulization appears to be less common.

Tuberculosis is an important differential-diagnostic issue in developing countries.

Numerous genetic loci have been identified that contain susceptibility genes for IBD. Nearly all of these loci are of absolute low risk, but identifying them is important for the development of diagnostic markers and therapeutic targets in the future. Gene mutations known to be implicated in altering the predisposition to CD or UC have different distributions in different countries of the world, particularly where there are racial differences [13]. NOD2 mutations are not reported in any of the studies from Asia [14], whereas polymorphisms in the tumor necrosis factor (TNF) superfamily 15 gene (TNFSF15) have been found to be associated with CD in East Asians [15].

IBD is a chronic, intermittent disease. The symptoms range from mild to severe during relapses, and they may disappear or decrease during remissions. In general, the symptoms depend on the segment of the intestinal tract involved.

Symptoms related to inflammatory damage in the digestive tract

General symptoms associated with UC and CD in some cases

The diagnosis of IBD in adults requires a comprehensive physical examination and a review of the patient’s history. Various tests, including blood tests, stool examination, endoscopy, biopsies, and imaging studies help exclude other causes and confirm the diagnosis.

Excluding intestinal TB in areas with a high pretest probability

Biopsies are routinely obtained during endoscopy. It is important for the endoscopist to consider what specific question he or she is asking of the pathologist with each biopsy sample submitted for evaluation. Some of the important reasons for obtaining biopsies include:

Note: it is important to minimize diagnostic medical radiation exposure, due to the potential risk of radiation-induced malignancy.

The European Society of Pediatric Gastroenterology, Hepatology, and Nutrition (ESPGHAN) has published the revised Porto criteria for the diagnosis of IBD in children and adolescents [34]. The revised criteria are based on the original Porto criteria and the Paris classification of pediatric IBD, incorporating novel data such as serum and fecal biomarkers. The criteria recommend upper gastrointestinal endoscopy and ileocolonoscopy in all suspected cases of pediatric IBD, with magnetic resonance enterography or wireless capsule endoscopy of the small intestine. Imaging is not necessary if typical UC is diagnosed using endoscopy and histology.

Differentiating between UC and CD

Table 3 Features for differentiating between UC and CD 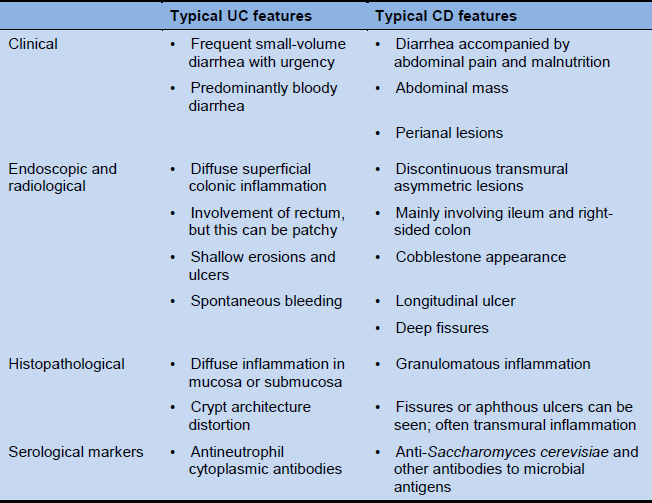 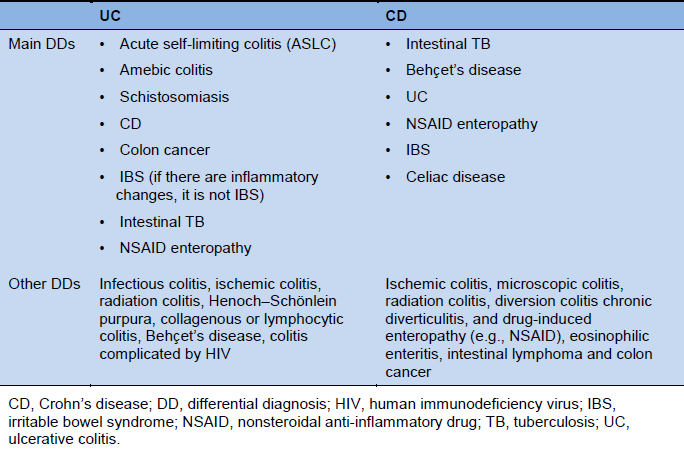 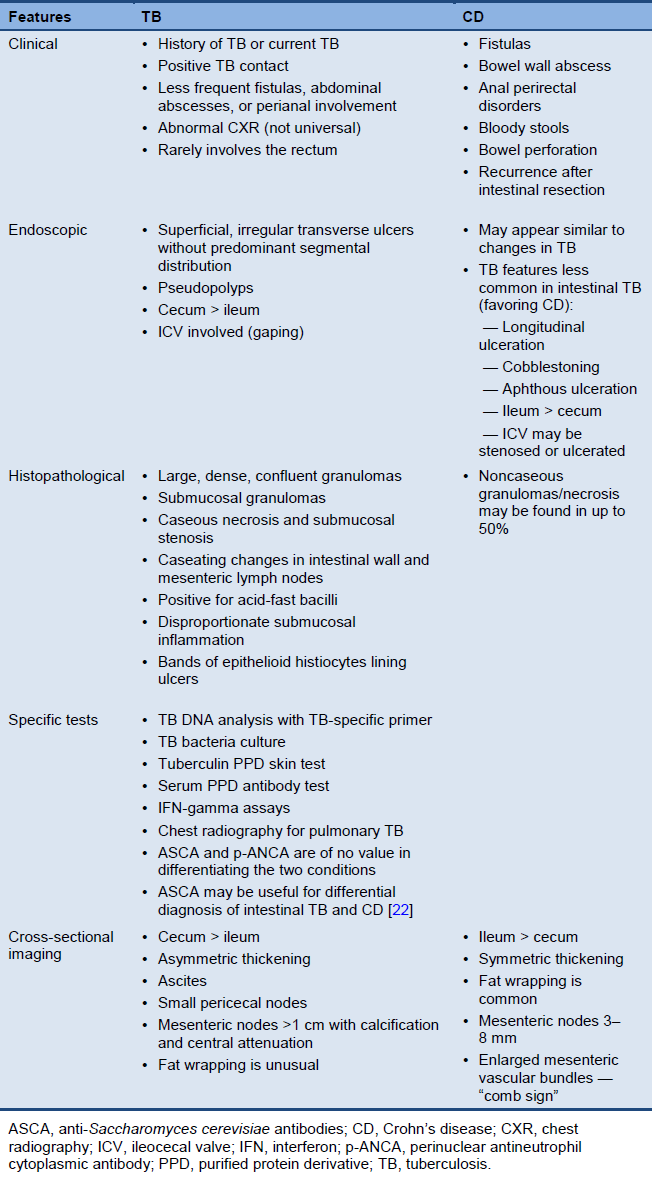 It is important for the patient to be provided with an explanation about the disease and individual information. Active patient participation in decision-making is encouraged.

IBD management often requires long-term treatment based on a combination of drugs to control the disease. Clinicians should be aware of possible drug interactions and side effects. Often, patients will require surgery, and close collaboration is required between surgeons and physicians to optimize the patient’s therapy.

IBD management should be based on:

The goal of treatment is to: 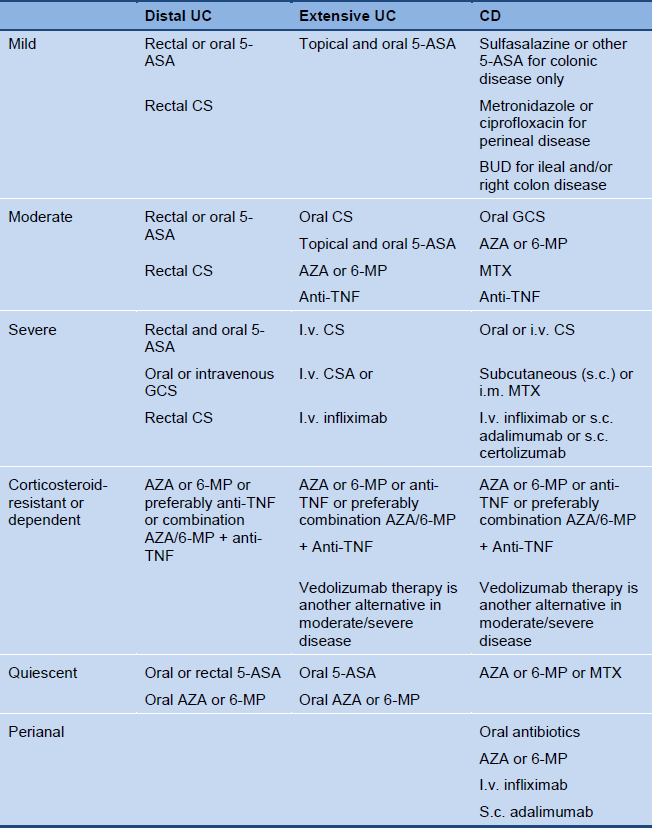 IBD patients may require hospitalization for surgery or for medically refractory disease— this accounts for at least half of the direct costs attributable to IBD.