One striking characteristic of EC throughout the world is its great geographic variation in incidence, with 10-fold differences reported over distances of a few hundred kilometers. Worldwide, the highest risk populations are found in two geographic belts, one in central Asia from the Caspian Sea to north central China, and the other from eastern to southern Africa (Figure 1) 3. Age-adjusted incidence rates over 100  cases/100,000 inhabitants/year have been reported from some areas in these regions 4. Intermediate risk populations are found in southern  South America (in southern Brazil, Uruguay, Paraguay and northern Argentina), and in northwestern France. Most of the world is considered low-risk, with incidence rates less than 10/100,000/year. In the SEER cancer registries in the US, the age-adjusted incidence of EC/100,000/year in 2002 – 2006 was 7.9 in white males, 1.9 in white females, 9.3 in black males, and 3.0 in black females 5. In low-risk  countries like the US, the male:female ratio of cases is usually about 3-4:1, but in the highest risk populations, this ratio approaches or even falls below 1:1 4.

Throughout most of the world, and in all high-risk populations, esophageal squamous cell carcinoma (ESCC) is by far the most common histologic type of esophageal cancer. Over the last few decades, however, esophageal adenocarcinoma (EA) has become more common in the low-risk populations of the United States and Europe, likely due to increases in obesity, gastroesophageal reflux and Barrett’s esophagus. 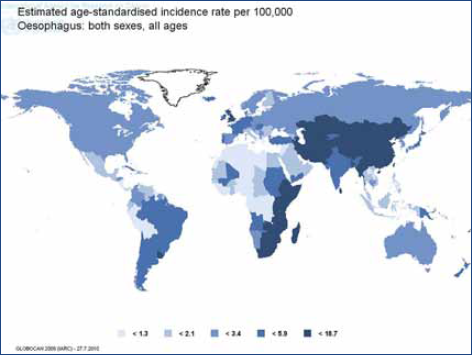 The major risk factors for esophageal cancer differ in low-risk and high-risk populations 4 (Table 1). In most low-risk countries, cigarette smoking and alcohol consumption are the dominant risk factors for ESCC. In the US, over 90% of ESCC cases can be attributed to these two exposures alone. Additional contributing risk factors include a low dietary intake of fruits and vegetables and factors related to low  socioeconomic status. A few host medical conditions have also been associated with increased risk of ESCC in low-risk populations, including previous or concurrent squamous cell carcinoma of the head and neck region, achalasia, tylosis, caustic esophageal strictures, and the Plummer-Vinson syndrome. The major risk factors for EA are Barrett’s esophagus, gastroesophageal reflux, obesity, and cigarette smoking.

Table 1: Characteristics of Esophageal Cancer in Low-Risk and High-Risk Populations 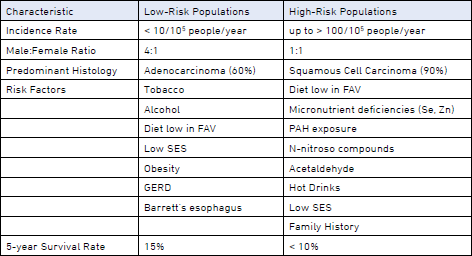 In most high-risk populations, tobacco and alcohol are not major risk factors for ESCC. Tobacco consumption in these groups is typically low, both in terms of the prevalence of smoking and in the amount of tobacco consumed by smokers, and alcohol consumption is even lower. In addition, in the highest-risk areas, where there are nearly as many ESCC cases in women as in men, virtually none of the women smoke or drink. These high-risk groups may, however, be exposed to some of the major tobacco carcinogens, such as polycyclic aromatic hydrocarbons (PAHs), nitrosamines and acetaldehyde, in  other ways. Recent studies have documented high levels of PAH exposure in nonsmokers in Linxian (a county in the high-risk region in north central China), in northeastern Iran and in southern Brazil. The source of these exposures is not yet known, although in Linxian it may be related to ingestion of ambient soot particles released from heating and cooking with soft coal in unvented stoves, while in Brazil it may be caused by drinking the beverage mate. Non-tobacco exposure to nitrosamines and acetaldehyde has also been suggested in Linxian and in northeastern Iran, possibly due to changes in oral bacteria that accompany poor oral hygiene and tooth loss. Other risk factors reported in highrisk areas include diets low in fruits and vegetables, low levels of certain micronutrients, especially selenium and zinc, low socioeconomic status, exposure to fungal toxins such as fumonisins, and drinking hot liquids.

One of the most consistent risk factors for ESCC in high-risk populations is family history, and preliminary molecular studies support a role for genetic susceptibility in the etiology of ESCC in these areas. Studies have shown high frequencies of loss of heterozygosity (LOH), characteristic patterns of gene expression, and significant differences in both LOH and gene expression by family history in tumors from north central China. In addition, recent genome-wide association studies have identified several susceptibility loci in this high-risk population.

Both cell types of esophageal cancer have a dismal prognosis. In the most recent SEER data, for 1999 – 2005, the overall 5-year relative (disease-specific) survival for EC patients was 16.4% 5. This has improved from 4.7% in 1975 – 1979, but it is still the third lowest survival rate (after pancreas and liver) among major cancers. In developing countries, the 5-year survival rates are usually less than 10%.

The main reason for poor survival in esophageal cancer is that most tumors are asymptomatic and go undetected until they have spread beyond the esophageal wall. The esophagus is a distensible organ - it distends to let food pass - so most patients do not complain of dysphagia or other symptoms until the tumor significantly obstructs the lumen, and by that time it has usually invaded through the wall and/or  metastasized. Significant reduction in esophageal cancer mortality, both in low-risk and in high-risk populations, will probably require the development of successful new strategies for screening asymptomatic high-risk individuals which can diagnose and treat more cases at earlier, more curable stages of the disease.

We think there are five components needed for a successful early detection and treatment program for esophageal cancer:

Early detection is the key to less invasive management and improvement in survival for esophageal cancer. A national early detection program for ESCC is now being implemented in high-risk areas of China, and similar early detection programs are being considered in parts of Iran and Kenya. An example of an international collaboration which is contributing to the Chinese program is now ongoing in Feiching and Beijing, China under the leadership of Dr. Wang Guiqi (Cancer Hospital, Chinese Academy of Medical Sciences), with co-investigators Dr. Jacques Bergman (Academic Medical Center, Amsterdam); Dr. David Fleischer (Mayo Clinic Arizona); Dr. Sanford Dawsey (National Cancer Institute); and Dr. Bas Weusten (St. Antonius Hospital, Nieuwegein, The Netherlands) (Figure 2). Patients identified with precursor lesions or early squamous cell cancers are being treated with radiofrequency ablation 6. In some cases, endoscopic mucosal resection is also utilized. BARRX, Incorporated, Sunnyvale, California, is supporting this study.