In order to evaluate the influence of language on the impact of WGO Train The Trainer (TTT) courses, we compared the English version (October 2009) and a Spanish version (May 2010), using a Likert scale administered to 10 Chilean gastroenterologists who attended the two TTT courses, the English language TTT as a faculty or student, and the Spanish language TTT as faculty. Their first language is Spanish. An English speaking person acted as leader in both versions and also participated in the comparative study.

The aim of the study was to evaluate the effect of the use of a foreign language in comparison to the mother tongue, on the outcomes of the
Course.

The results show that the overall quality of the course, of its faculty, and its didactic content were similar in both versions. However, activities which involved the direct participation of the attendees, such as the workshops, breakout and hands-on sessions, as well as the general level of
involvement, were rated as better in the Spanish version.

Adult education should be an important part of our daily work as gastroenterologists, but it is rarely a component of conventional training. It is not intuitive. Our specialty deals also with several skills that need to be learned. Generations of gastroenterologists in the world are in need of a
variety of training resources to enable them to apply modern concepts of adult education.

The WGO, along with its National Member Societies, have for 10 years planned and delivered “Train the Trainers” (TTT) courses, which aim to improve the teaching skills throughout the world. A large panel of experts originating from different parts of the world have been assembled over the years to present this program to trainees of multicultural and multiracial origin in English. By bringing together trainers and trainees from across the globe in intensive and interactive 4-day sessions dedicated to the development of teaching and training skills, WGO has developed a forum for interaction between world leaders in education, in order to share experiences and discuss common problems and solutions. The outcome of those TTT Courses has been outstanding.

The Organisation has realized that in some areas where English is not the first or even the second language, the impact of the course could be
less than optimal. Indeed, in some regions, the delivery of these courses exclusively in English, (being fluent in English has been a prerequisite to be involved in the TTT courses) may limit the transmission of these teaching skills and may be a real issue in areas where they are most needed.

Recently, (May 2010) and for the very first time, a Spanish language TTT was organized in Chile. Two members of the WGO TTT Task Force were involved as faculty. The Chilean Society of Gastroenterology supported this TTT which proved to be a real success.

The rest of the Faculty comprised of 11 Chilean gastroenterologists involved in teaching, who had previously been part of the regular English TTT (October 2009) also held in Santiago, Chile and which also was a great success.

A comparison of these two experiences only 7 months apart, was performed in a retrospective analysis, considering the “pros and cons” of conducting the TTT in English versus the Spanish version.

The courses compared were A) The TTT course, held in Santiago, October 2009, with an international faculty lead by Eamonn Quigley using
English as the sole language; and B) The TTT course held also in Santiago, but with a Chilean faculty lead by Eamonn Quigley using Spanish  as the main language. The entire faculty has a good knowledge of English.

The survey was taken by an 11 faculty team, with at least two different TTT experiences, one as students and the other as a faculty. Some of them had more than one TTT experience as faculty. Two of the WGO Task Force (Eamonn Quigley and Roque Sáenz) were part of the courses and the survey.

A five point Likert type scale was developed for 29 questions covering the main TTT course items. Questions were designed to give quantitative comparison of each item using addressing the relative merits of the English and Spanish-language versions.

The Scale was created in an Excel electronic worksheet, cleaned, and then transformed to the Stata 9.0 package for statistical analysis. Descriptive statistics and non-parametric comparative analysis were used, due to the small number of participants. Results were based on an α error of 0.05 and a β error of 0.2.

Questionnaires were mailed to the 11 gastroenterologists with both TTT experiences. We received 10 answers back (91%).

There was an agreement with the following positive statements (means greater than 4, statistically significant differences compared with the correspondent negative statement):

There was agreement with the following positive statements (mean greater than 3, statistically significant differences compared with the corresponding negative statements):

There was a disagreement with the following statements (mean less than 2, statistically significant differences compared with the corresponding positive statements):

The following statements were not conclusive (any mean with no statistically significant differences with the opposite statement):

To evaluate two different versions of the same course in different languages is not difficult in the case of prospectively designed and planned instruments. This was not the case here. The idea to evaluate both versions occurred following the development of the course and, therefore, a retrospective approach had to be invoked.

The initial experiences of the Spanish course, which were informally commented on during the course and later officially evaluated by the Faculty team, was that the participation of the trainees increased and the quality of their presentations improved when the course was presented in Spanish, their mother tongue, rather than in English version.

The logical reason behind these differences lays in the fact that despite a working knowledge of English by every student, some obstacles are to
be expected, especially when which open discussion or presentations are required, which are essential components of TTT courses.

Despite the apparent logic of these observations, WGO support for TTT courses in a different language demands more than subjective impressions.

Building a TTT course in another language faces several difficulties: The quality of the local faculty must be at least as good as that of the international, experienced faculty, the didactical content should maintain the same standard; and all the material, educational techniques, papers, PowerPoint presentations, workshop material, break out and management of report-back sessions should be of similar quality to that that he been achieved in the English version of TTT.

The aim of presenting the results of this survey is to show, with some basic level of evidence, that the overall quality of the courses was similar but that those activities that required more and open trainee participation were rated as in the Spanish version due to fluency in Spanish of all the participants.

In this survey, an evident bias exists. Almost all the participant’s surveyed speak Spanish as their mother language, and, therefore, may have a
subconscious vested interest in demonstrating that the Spanish course is of similar quality. A non-biased survey could be one with similar density of Spanish and English speakers, evaluating the two courses. This was not the case, so, some bias has to be taken into account.  However, for the researchers it has been very important that the solely English faculty opinions have been similar to the others. On the other hand, the statistical analysis shows strong consistency and a relatively narrow dispersion of the data.

There was agreement (with high statistically significance) among the participant’s surveyed, in the following statements:

Therefore, a Spanish TTT could be encouraged in other scenarios in Latin-America as well as in Spain in order to improve the teaching skills
and the overall quality of Gastroenterology in areas of need. 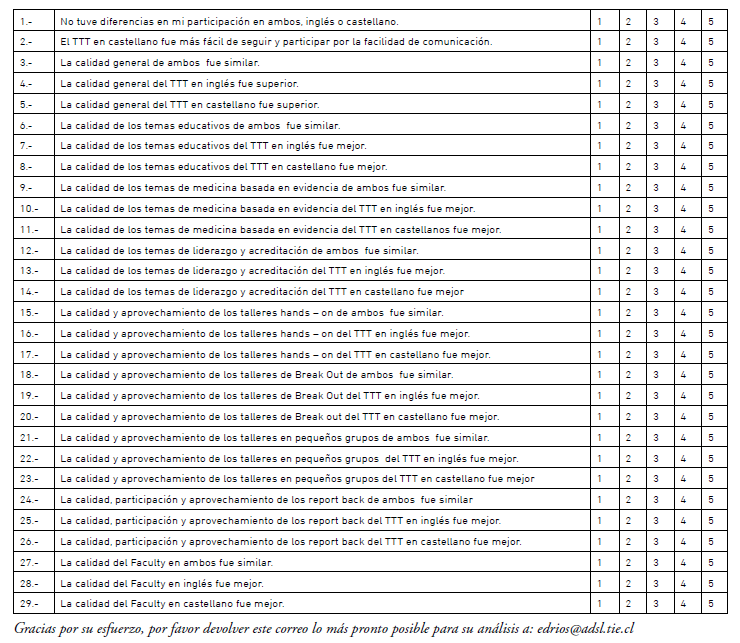