The Future of Colorectal Cancer Prevention in the United States

A perspective from a high burden, sufficient resource country

Colorectal cancer (CRC) is one of the most common cancers with over 1.2 million new cases of colorectal cancer and more than 600,000 deaths worldwide per year. CRC is the fourth most common cause of cancer death and the second most common cancer in the world and the best estimates are that the rate will continue to increase substantially over the next decade 1. There is substantial variability in CRC incidence (10 fold) and mortality (5-6 fold) among countries with rates continuing to increase in many developing countries while they are stable or decreasing in some developed countries 1, particularly those that have substantial CRC screening programs. Winawer et al 2 have presented the concept of Cascade CRC Screening Guidelines among countries that are evidence based and resource driven 2. The guidelines suggest that countries like the US that have a high CRC burden and have sufficient (at least for now) resources might opt for colonoscopy as a major screening option whereas countries with substantial CRC burden but severely limited resources might opt for fecal occult blood testing as the only affordable screening approach.

CRC time-trend data in the US illustrate one of the great cancer prevention success stories of the last 30 years. Both CRC incidence and mortality have been steadily decreasing and CRC deaths have been cut in half since 1975. It is tempting to attribute these decreases to CRC screening but the decreases started well before screening for CRC was widely used. The best estimates are that about half of the decreases have been due to screening and the rest due to changes in risk factors along with some improvement in treatment. 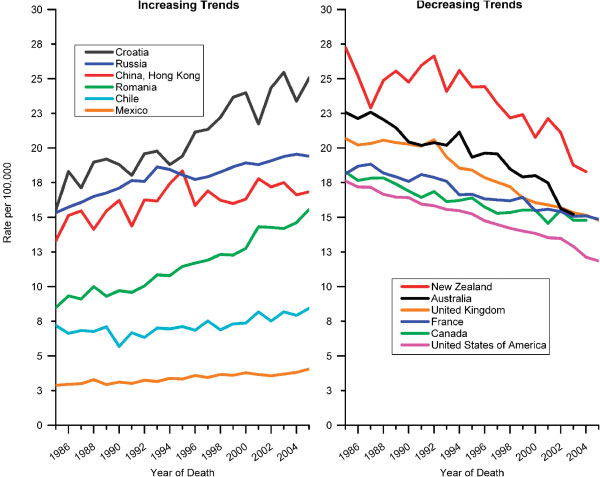 Some future trends seem certain. The demand for CRC prevention efforts will continue to rise as the 50-75 year old population is projected to slowly grow in the US over the next 35 years. It also seems likely that whatever screening/prevention choices are made, the recent favorable trends in CRC incidence and mortality will continue; the uncertainty is what the magnitude of the future decreases will be. CRC screening rates have been steadily increasing in the US for the last 25 years; currently almost 70% of the population is being screened and colonoscopy is by far the dominant screening strategy. We will, no doubt, continue to see the benefit of this high and increasing screening rate over the next decade or longer. In contrast, trends in some CRC risk factors are not encouraging, the decline in smoking rates has stabilized, there is little evidence the we are eating a healthier diet and rates of obesity and physical inactivity are still increasing. Efforts that successfully address these risk factors could substantially decrease CRC risk but there is little doubt that screening will continue to be the major CRC-specific preventive strategy for the foreseeable future. In a similar way, chemoprevention, particularly with aspirin and other NSAIDs, has great promise as an adjunct to screening but chemoprevention will not replace screening in the foreseeable future.

In the US, thinking about CRC screening has been evolving from the concept of early detection of cancer toward CRC prevention by identification and removal of colonic polyps. As this trend continues it will benefit screening tests that can identify advanced adenomas with relatively high sensitivity such as endoscopic or radiologic imaging tests and the higher sensitivity fecal occult blood tests. Colonoscopy will likely continue to be the dominant method of colon cancer screening in the US, at least in the near future. Colonoscopic screening for CRC has great appeal; it is the only currently available colon screening test that can both identify and remove colonic polyps in the entire colon in a single procedure. Currently clinical and financial incentives in the US strongly favor colonoscopic screening. Primary care physicians in the US overwhelmingly view colonoscopy as the “best” colon cancer screening option and are concerned that doing anything less would leave them legally liable for failure to properly screen for CRC. Colonoscopic screening has the added advantage of satisfying the CRC screening requirement for up to 10 years and shifting some of the responsibility for screening from the primary care provider to the endoscopist. For endoscopists, colonoscopy is satisfying both clinically and financially and until recently payers have largely passed the higher cost of colonoscopy to employers, taxpayers or the individual purchaser.

The apparent increase in adenoma detection rates is an indicator of improving colonoscopy quality but it also raises a clinical paradox. Improved colonoscopy quality should lead to a lower future CRC risk for the screened group but it will also lead to substantially increased  surveillance intensity of the now lower-risk group. As more adenomas are found, more patients will move from screening to surveillance and more will move from 5-10 year to 3 year surveillance intervals leading to a substantial increase in costs unless surveillance recommendations are adjusted.

The more serious threats to colonoscopic screening/surveillance are the cost increases that are not associated with improved outcomes. Colonoscopy screening and surveillance intervals recommended by endoscopists are often shorter than those recommended by the current guidelines 8, and there has been a marked increase in the use of anesthesiology services to provide sedation for endoscopy 9 and some groups have incorporated anesthesiology and pathology services as part of the revenue streams of their endoscopy units. These practice patterns can all lead to substantially increased costs of colonoscopy without evidence of patient benefit.

If colonoscopy is going to be replaced, the change will likely be driven by Accountable Care Organizations or similar groups who will have responsibility for costs of overall health care of a population. The strongest initial challenge will likely come from fecal immunochemical testing. Modeling studies suggest that FIT, if done annually, would be as effective as colonoscopy, 10 and the cost of the test itself is about 1% that of colonoscopy. There will, however, be substantial costs associated with trying to assure annual adherence to FIT. Controlled trials comparing colonoscopy to annual FIT have been initiated but results won’t be final for at least a decade.

Gastroenterologists can and should lead the CRC prevention effort providing the best risk stratification and modification and by using the best prevention and screening tools available, including providing high quality colonoscopy without excessive costs. Such an approach will be good for our patients and what is good for our patients will ultimately be good for Gastroenterology.